Episode 707: Waterloo: One Small Step For A (Mad) Man, One Soft Shoe (Or Sock) For Bert Cooper 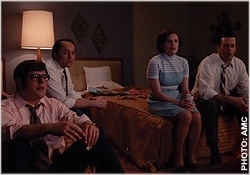 “I thought everything was back to normal?” -- Peggy Olson.

For this “midseason ending,” I doff my beret, fedora, space helmet, and Pucci-like head scarf to Matt Weiner. Plus, I blink my false eyelashes furiously in his direction.

For all the complaints about this seventh season, this episode, anchored in the July 20, 1969 moon landing, offered poetry, art, huge story payoffs -- plus room for continuing drama.

It was about mentors, leaders, fathers and father figures. And families and TV, and identity and disconnection. And death and rebirth. And divorce and money.

Oh hell, Weiner gave us the exact same existential themes he obsesses over in every single episode. Except this time, he delivered genuinely surprising and satisfying character and plot twists, reversals, parallels and realignments.

Basically, it all comes down to the issue that Peggy raised in her presentation: We are all starving for connection.

Megan and Don, Peggy and Don, Pete, Ted, Roger: Weiner moves these characters round and round like they’re on a carousel -- just like the name of Don’s famous presentation. As for spinning the plot, how many ways can Weiner possibly reconfigure Sterling Cooper? 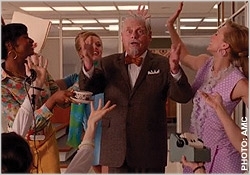 Well, here we go again, into the breach with McCann. (A friend who works at McCann says he can’t watch -- it causes too much PTSD for him, since McCann is such a regular punching bag for the "Mad Men" writers.)

But first, I’d like to begin with a little elegy for Captain Bert, whose charming song-and-dance number from the afterlife was a lovely call-out to the storied Broadway career of Robert “How to Succeed in Business” Morse.

Indeed, even before this number (shut the door and wave, Bert!), there were repeated references to the idea that all the world’s a stage, and the theme of performance and putting on a show. Lou tells Jim they’ve lost Commander, and that “the Don Draper Show is back.” Peggy, Don, Pete, et al practice the Burger Chef presentation over and over; cruel Jim Cutler tells Don that he’s a sham character: “I’ve been backstage and I’m unimpressed,” he says. Roger is upset that his last words to Bert were from “some old song.” And Cooper’s last word was “Bravo.”

But the dream scene also served as a hugely ironic poke at the premise of advertising itself, a business devoted to creating endless desire for buying new and improved stuff.

Of course, the remaining partners (sorry, Harry) are over the moon about the millions they’ll make in this possible buyout. In the end, however, right after elfin Daddy-o Bert scampers to the other side, he reminds Don that “The best things in life are free.” 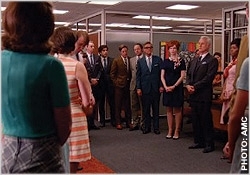 Nothing happens by chance on “Mad Men,” and Cooper dies in high aesthete style, sitting on a sofa in front of his very impressive black-and-white Jackson Pollock painting. Pollock was the king of “action painting,” a post-war movement that blew up the comfort of the figurative work that preceded it. Pollock’s violent spots and drips illustrate the chaos, and reality, of a post-nuclear world.

So much for the revolution, however. Like a surreal twist on the American Gothic portrait, Bert and his black maid sit rigidly upright on the couch together. She wears a starched black-and white uniform; they watch the moon landing on a black-and-white TV.

Although his old patrician (and frankly, racist) background prevented him from being able to accept an African-American receptionist at work, at home, Bert relied completely on his black surrogate-wife, proving that the race issue is not so black-and-white.

At the office, Cutler tells the troops that they should honor their founder with the poem “Oh Captain, my Captain,” written by Walt Whitman after the assassination of Abraham Lincoln. Whitman doesn’t want to acknowledge the death of his beloved Captain, who ended slavery and reunited the country, and he even asks if Lincoln’s passage is a dream (!) He refers to the Captain as "my father." 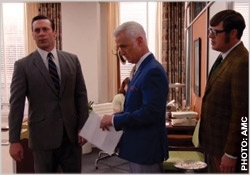 Truly, Bert Cooper is the father of the agency, and a surrogate father to Roger, the prodigal son. (The snappy Zen koans that Bert speaks before his death allow Roger to fire off his great line about when a man starts talking about Napoleon …)

For both Don and Roger, Bert’s death is the catalyst for growth. Roger is bothered that Bert told him he wasn’t a leader and didn’t have a vision. So he goes out and engineers the deal with McCann, which saves Don.

But before Don knows that, hearing about Bert’s death allows him to act unselfishly perhaps for the first time, doing the right thing for Peggy by handing her the Burger Chef presentation, which she should have had all along. Don reverses what Peggy said to him both in handing it back, and intro-ing her with “Every great ad tells a story. Here to tell that story is Peggy Olson.”

Weiner directed this episode, and he really showed his chops with the hyper-realist visuals of that Burger Chef meeting. Suddenly, the sound dimmed, the colors bleached and then became highly saturated, and Peggy was faced with her Waterloo. But, in contrast to her dowdy presence previously, she looked beautiful and presented perfectly, a master in control of the room, proving she is far more than “the voice of moms.”

Indeed, she was thinking on her feet by bringing in the poetry of the moon shot, also slyly including the fact that a certain 10-year-old was waiting for her at home, “parked in front of the TV.” 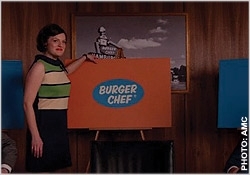 That scene between her and Julio was beautiful. Her own son, conceived with Pete and then given away, would be roughly Julio's age. When the poor neighbor kid said that his mother “don’t care for me,” Peggy told him of course his mother did -- that’s why she was moving. Peggy was speaking for herself, as well.

The parallels between her and Don were clear in this episode: They exchanged places on the presentation, and, in back-to-back cuts, each was seen packing, in transition. Peggy is finally redoing her place, making it more grown-up, and moving on with their lives.

An essential part of the “Family Supper at Burger Chef “ pitch is that it’s a way to get families to relax and speak with each other, away from the TV.

Weiner again expresses his love/hate relationship with the small screen, and this too is obviously ironic. First of all, we are getting this anti-TV message while glued to his award-winning hit show. Also, by anchoring this episode around the moon landing, he’s acknowledging TV's power to connect individuals, families, workers, and an entire country during a time of national pride.

I loved the sweeping shot of all the newly made and sometimes odd family configurations, watching the landing in awe. Roger has returned to his nuclear family with Mona, and now has replacement children in his son-in-law and grandson. In their hotel room, with children Pete and Harry at their feet, Peggy and Don looked awfully comfortable and compatible, sitting on the bed, sharing a brewski.

Afterwards, Don reaches out by phone to his only family, his children. Earlier, the nearly wordless break-up scene with him and Megan was like a tone poem. The acting was exquisite -- even Jessica Pare held up her end. 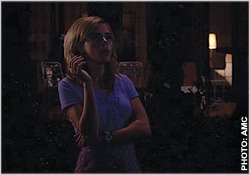 Sally repeats the football hunk’s view of the moon landing—that it was too expensive. Don tells her she’s being too cynical. I was taken with Kiernan Shipka’s performance, especially the way she aped Betty’s smoking behavior. But I couldn’t buy the idea that she would also copy Betty’s hair helmet. Girls at the time just didn’t do that. I guess it was supposed to show that she’s experimenting being both her mother and her father. All along, we thought she was carrying luggage and dressing up for the bare-chested college boy. But instead, she kisses the nerd.

That scene, involving one of about 10 telescopes shown in the episode, so expressed the texture of teenage experimentation during the summer: stolen kisses, followed by a drag, happen outside, in the dark, in the sultry air. They’re awkward and life-changing, and disappear as quickly as they occur, interrupted by a mother’s call.

Meanwhile, can we all hold out until March of 2015 to see what’s next for our own Wild Bunch?

Matt Weiner, you know that we’re starving -- and not just for dinner.

mad men, tv
18 comments about "Episode 707: Waterloo: One Small Step For A (Mad) Man, One Soft Shoe (Or Sock) For Bert Cooper".
Check to receive email when comments are posted.
Read more comments >
Next story loading