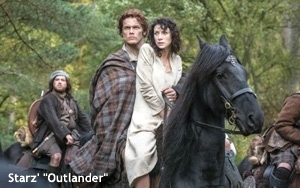 If it weren’t based on a proven franchise -- the hugely popular novels by Diana Gabaldon -- it might be tempting to suggest that Starz’ new period drama “Outlander,” which premieres tomorrow night, doesn’t stand a chance.

Consider these observations about it, at least at the start. It explores periods of history that likely seem remote (if not ancient) to today’s young television audience. It moves slowly. It centers on adults. It isn’t powered by excessive or especially graphic violence or sex. It has a literate narrative. It is best enjoyed when it has the full attention of the viewer.

That’s all true -- but “Outlander” is hardly dead in the water. Just the opposite; it’s full of life right from the beginning, even if it is in no rush to tell its story or startle its viewers. It seems to go against almost everything we have recently been led to believe that a successful television series has to be to compete in this time of dizzying competition among content providers. In other words it is instantly refreshing. Before the first episode is half over the very qualities that set it apart make it stand out in all the right ways.

I wasn’t familiar with the “Outlander” books, but throughout the recent Summer 2014 Television Critics Association tour and San Diego Comic-Con it seemed to be top of mind among critics, bloggers and industry executives alike. Citing the show's production schedule, Starz did not offer a session for the show at the Summer critics' gathering. (There was a session for "Outlander" at the Winter TCA tour earlier this year.) But Starz did make a big exclusive push for it at the Con, including a full-blown theatrical premiere of the first episode at a theater in the Gaslamp District which became one of the most buzzed-about events at the four-day fan-fest.

“Outlander” is clearly a hit with the critics anyway. In fact, many are calling it the best original series Starz has ever produced. As a huge fan of “Spartacus” it will take a while to convince me of that. Still, I understand the praise. The production values alone -- especially the photography -- are reason enough to watch. But “Outlander” is above all a compelling and sweeping love story. Such stories rarely come along and are even more rarely sustained on television. (I wonder why that is, given the unwavering huge interest in tales of romance? Geez, “The Notebook” is playing on one network or another every time I channel surf.) Throw in the fact that the woman at the center of it all -- a happily married World War II British combat nurse named Claire Randall (Caitriona Balfe in a career-making performance) who is mysteriously transported through time to the war-ravaged Scottish Highlands of 1743 where she becomes involved with another man -- is strong-willed, smart and independent, and this becomes a perfect television program for its intended audience.

Something about this production reminds me of those lavish big-budget miniseries that NBC and ABC used to deliver with such unrestrained gusto back in the ‘70s and ‘80s. Get to know “Outlander” now. It is likely going to be with us for quite a while.