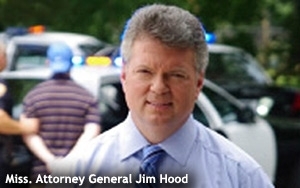 An anti-piracy group that counts Google among its members is backing Mississippi Attorney General Jim Hood in his dispute with the search company.

The International Anti-Counterfeiting Coalition this week asked a federal judge to deny Google's request for an injunction that would prohibit Hood from enforcing a subpoena for documents from the company.

“There is no reason why the Mississippi Attorney General should not be able to investigate reasonable concerns that unlawful conduct is occurring in connection with Google’s (or any other online company’s) services, advertisements, and statements,” the organization argues in a proposed friend-of-the-court brief filed on Thursday with U.S. District Court Judge Henry Wingate in Jackson.

“We adamantly disagree with Google's position,” coalition president Bob Barchiesi tells Online Media Daily. He adds that Google's argument, if successful, “could have a chilling effect on the independence of attorney generals across the country.”

The anti-piracy organization's papers come in response to a battle that erupted in litigation late last year, when Google went to court to seek a temporary restraining order against Hood.

Google sought to enjoin Hood from following through on a threat to sue the company for enabling Web users to access “illegal” content. The company also asked for an order that would ban Hood from enforcing a subpoena demanding information relating to outside companies — including operators of sites that Google indexes in its search engine — that allegedly play a role in copyright infringement.

Google said in its initial court papers that Hood spent the last 18 months threatening to sue the company, or even prosecute it criminally, unless it blocks “objectionable” content. Google also says that when it didn't agree to block material, Hood retaliated by issuing an “enormously burdensome” subpoena for “millions” of documents.

Although the dispute between Google and Hood has been brewing since 2013, the matter only landed in court after documents hacked from Sony revealed the existence of “Project Goliath” -- the reported code name for a Hollywood initiative to persuade state attorneys general to target Google for allegedly enabling piracy.

Earlier this month, Hood officially asked Wingate to reject Google's request for an injunction. He argues that he's investigating whether Google has violated Mississippi's consumer protection law, which prohibits businesses from engaging in deceptive and unfair trade practices. Hood also contends that the material he requested “is directly related” to discovering whether Google violated Mississippi law, and that Google shouldn't be “the arbiter of whether its conduct violates state law.”

But Google counters that the federal Communications Decency Act provides that intermediaries like itself are immune from liability for violating state laws by making available content created by others.

“Federal law denies individual states the authority to regulate Internet service providers like Google over the third-party content they make accessible over the Internet,” the company argues in a rebuttal to Hood filed on Thursday. “But for nearly two years, the Attorney General has pressured Google to remove third-party content he disfavors from its search engine and YouTube video-sharing service.”

The anti-piracy coalition argues in is papers that Google isn't protected by federal law for material it creates -- including its own ads, as well as its statements to consumers.

“Google represents to consumers that it demotes pirated content and claims that its top search results are 'high quality,' which Google has represented means sites containing original content, sites to which consumers should feel comfortable providing credit cards, and sites that do not contain malware,” the organization argues. “But even the limited evidence available without investigation suggests that Google’s claims about demotion of pirated content may not be accurate in at least some cases.”

The anti-counterfeiting organization isn't the only outside group seeking to weigh in on the case. A separate coalition including the groups Stop Child Predators and Digital Citizens Alliance also asked Wingate to reject Google's request.

Wingate will hold a hearing in the case on Feb. 13.