Social media is emerging as a key way for politicians and political organizations to engage and activate voters. To better understand how politicians are faring with audience engagement, we analyzed each U.S. senator’s Facebook page and how well the content on it engaged its intended audience.

On Facebook, engagement is defined by likes, shares or comments and our analysis, or scorecard, measured this and on a per-post basis, the average number of people who engaged with the page’s content. The scorecard intentionally measures engagement across posts — and the entire Facebook page — as social engagement is the wheel that turns social reach and virality. Given this, let’s look at the three important lessons this analysis reveals:

1. Politicians that promote action are crushing it on Facebook
We measured average engagement per post weighed against the page’s total fan count to assesses community engagement. With results ranging from 28 to 2007 (with bigger being better), Bernie Sanders’ Facebook campaign page is a terrific example of how promoting action boosts engagement. With a score of 695, nearly every post on his campaign page calls for some sort of action. And, as you can see, it significantly outperforms other content. 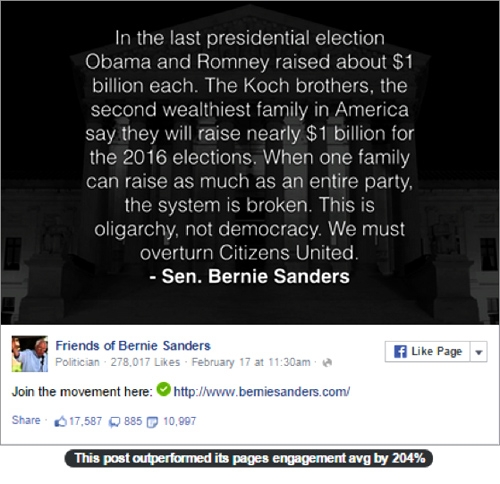 Conversely, politicians that lack a call for action on their Facebook page, and use it instead as a promotional tool, generally lack engagement. Take for example Marco Rubio, whose official Facebook page, with a score of 28, is at the bottom of the Senate pack. 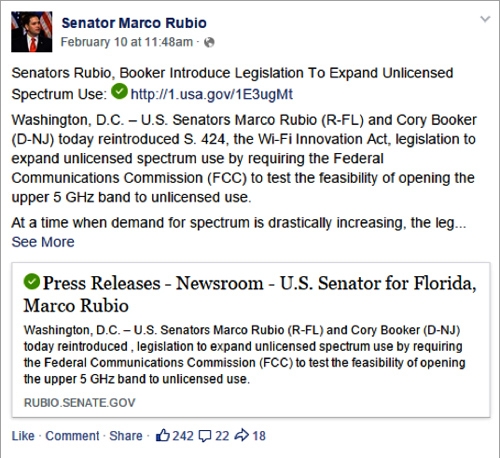 2. Engagement is the metric to watch
Unlike fan counts, engagement is a key metric because it translates into greater awareness, action, and reach. Here’s why:

1. Engagement reflects a post’s ability to capture constituents’ attention. It is a proof point that you’ve been able to create a connection between the voter and your content.

3. Further, the Facebook algorithm determines what content is promoted in users’ news feeds based on content engagement. Therefore, the more voters that interact with your content, the more likely it is to be promoted to other constituents’ news feeds (where the vast majority of posts are seen and read). This is how content can go viral.

5. The ultimate form of engagement is one in which your Facebook fans take action. Bernie Sanders’ page asks fans to “Join the movement” but anything from joining a newsletter to signing a petition that drives deeper interaction is a desirable Facebook action.

3. Causes — political and otherwise — that tap into social action increase reach, fundraising, volunteerism and other measurable outcomes.
During the government shutdown in the fall of 2013, one organization that posted Facebook content about the shutdown had 2,500 people engage by clicking Like or leaving a Comment. Of these 2,500 people, 585 went on to complete an action to “Tell Congress to Get Back to Work for Americans,” thus growing their email list with 585 new Facebook generated email addresses.

Constituent engagement relies on not just driving fan counts, but providing actionable content that drives reach, virality and campaign outcomes. With 2016 clearly in our sights and the momentum behind social campaign management grows, effectively managing this channel will only continue to grow in importance. As a result, we’ve posted our scorecard on our website for anyone interested in keeping their thumb on their U.S. senator’s Facebook evolving content and strategies and appreciate your sharing here any lessons you’ve learned about the social’s changing role in election cycles.

politics
2 comments about "Lessons From The Savviest Facebook Senators".
Check to receive email when comments are posted.
Read more comments >
Next story loading