As noted in our column headline above, our research indicates that luxury goes way deeper than the affluent market segment. Luxury purchasers — adult consumers (18+ in age) who bought one or more luxury goods or services in the prior twelve months — constitute almost 20%, or about 46 million, of the 239 million adults in the United States.

Luxury marketers would be correct in surmising that as household income increases, the proportion of luxury purchasers rises within each of the three household-income segments outlined below. Notably, though, luxuries were bought by almost as many consumers whose household income is less than $75,000 (20 million adults who are not usually classified as affluent by marketers) as by those with household incomes of $75,000 or more (26 million affluent consumers, including the four million in the upper income segment of $250,000 or more). This being so, it’s our point of view that target luxury markets are actually much larger than many luxury marketers currently believe. 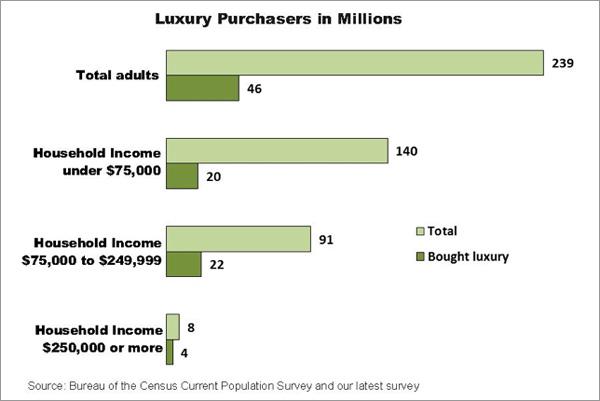 As noted below, of the 46 million U.S. consumers who bought one or more luxury products or services during the past 12 months, 23 million purchased fine or premium alcoholic beverages. Premium beauty items came in second at 20 million, and luxury travel, third at 13 million. It should be noted that although luxury vehicles, with 7 million purchasers, appear at the bottom of this list, the dollars spent on one Cadillac, BMW, etc., clearly outweigh the cost of a fine bottle of wine, which tops the list as regards the number of purchasers. Considering the three household-income segments to the right of the Total Luxury Consumers column in yellow below, it is evident that all three segments matter; and while the truly high income group is important, it is not necessarily as important as many believe. 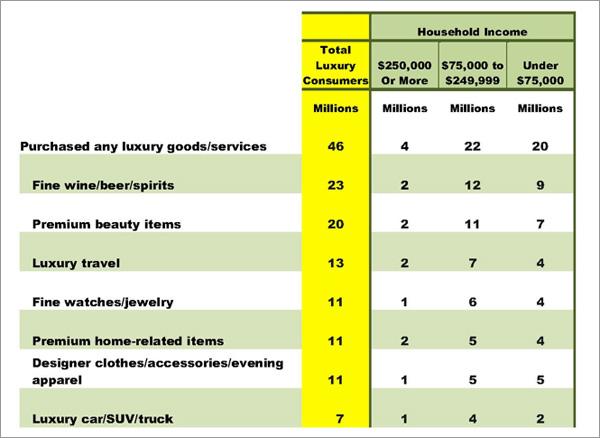 In short, luxury products are on the radar not only for the truly affluent but also for many consumers in the mass-market space, as well as for those in between. Consequently, we urge luxury marketers to make the most of all the opportunities available to them.

2 comments about "Luxury Goes Way Deeper Than The Affluent".
Check to receive email when comments are posted.
Read more comments >
Next story loading