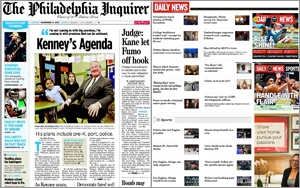 The sound of axes swinging is all too familiar at newspapers (figuratively speaking) -- and 2015 is turning out to be another ugly year, with layoffs and buyouts across the industry.

The latest round of job cuts comes at the Philadelphia Media Network, publisher of The Philadelphia Inquirer, Philadelphia Daily News and Web site Philly.com, which laid off 46 newsroom employees across the three properties, or around 16% of the total editorial staff.

At Philadelphia Daily News, the layoffs affected 17 out of 60 newsroom positions, including reporters and copy editors, while Philly.com also lost 17 out of 30 editorial positions and The Philadelphia Inquirer lost 12 of around 200 employees. The layoffs, which take effect December 4, are part of a larger restructuring plan that aims to create a single newsroom for efficiency and cost savings.

The plan was presented last week by PMN publisher Terrance C.Z. Egger, previously publisher of the Cleveland Plain Dealer, who was appointed to lead the struggling company in August of this year. Egger was brought on board by PMN’s new owner, Gerry Lenfest, who took control of the company with partner Lewis Katz last year, following a court battle against their erstwhile partner, George Norcross III. Katz died in a small plane crash in May 2014, leaving the company under Lenfest’s ownership.

As noted, these are just the most recent in a series of layoffs and buyouts at big newspapers across the country. Tribune Publishing is hundreds of employees from its total work force of around 8,000, through a combination of buyouts and layoffs.

The planned layoffs were apparently a factor in the disagreement between Tribune’s corporate management and Los Angeles Times publisher Austin Beutner, which led to his firing in September. Roughly 50 out of 450 LAT newsroom positions were cut in October.

In September, the iconic New York Daily News tabloid cut around 50 employees, involving the demise of the features and business pages and big reductions in the sports writing team. The layoffs came not long after owner Mort Zuckerman told staff he was considering putting the newspaper on the auction block -- but then failed to complete a deal.

Some industry observers speculate the layoffs were intended to put the newspaper on a better financial footing in order to make it more attractive to potential buyers.

In October, The Boston Globe cut around 40 employees through voluntary buyouts and layoffs, and in May, the San Diego Union-Tribune cut 178 employees, or over a quarter of its workforce, mostly in production and distribution roles. In March, the Chicago Sun-Times cut 15 newsroom positions with voluntary buyouts, while Gannett flagship USA Today offered voluntary buyouts to employees 55 and older.

In September, Gannett extended the offer to its full work force of around 16,000.