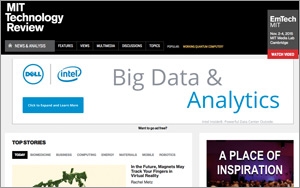 A series of new digital products will roll out in 2016 for the brand. Currently, the URL is available as one of the publication’s local editions, but the website is not live.

MIT Technology Review's editor in chief and publisher Jason Pontin stated that this operation will extend the publication’s reach in China, which has a "rapidly expanding technology ecosystem."

According to MIT’s Office of the Provost, Chinese students make up the largest foreign student enrollment at MIT, with 680 currently enrolled. The number of students from India at MIT comes in second, at 336.

According to recent surveys, around a third of America's nearly 1 million international college students are from China. The New York Times reports that in 2013-2014, Chinese students made up almost 60 percent of foreign-student growth in American colleges.