Today, companies like Apple and Google are re-creating and redefining the idea of American excellence, making “Made in the U.S.A.” evocative once again. Even American automakers, once a sad symbol of America gone wrong, are creating exciting, innovative products and finding new and ardent fans. Chrysler’s “Imported from Detroit” campaign set a stage of American resilience and pride – perfect for the re-launch of the brand. Cadillac’s move to New York and subsequent luxury differentiation was a smart move that should start to pay dividends as well.

The brand of “American made” has waxed and waned over the years. During the height of national pride and support in World War II, iconic brands such as Jeep, Boeing and Spam launched, and “Made in America” stood for ingenuity, dependability and progress. The ‘70s, ’80s and ‘90s saw that brand erode with the introduction of Japanese automakers, Nintendo and the Internet making it much easier for individual consumers to buy from any country.

Despite a rocky history, Americans are turning back to American brands in record numbers and our research discusses why.

Americans are much more familiar with American brands than brands from other countries. That familiarity, at least in part, appears to be driving a preference for American brands.

Overall, Americans rate American brands more highly than brands from other countries. This is the case for every attribute tested, but America stands out for ease of use, styling, design and innovation. That’s a powerful foundation on which to build any brand. 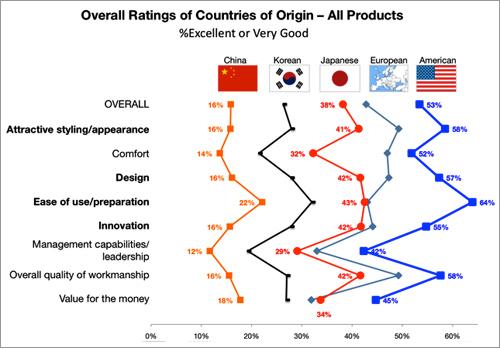 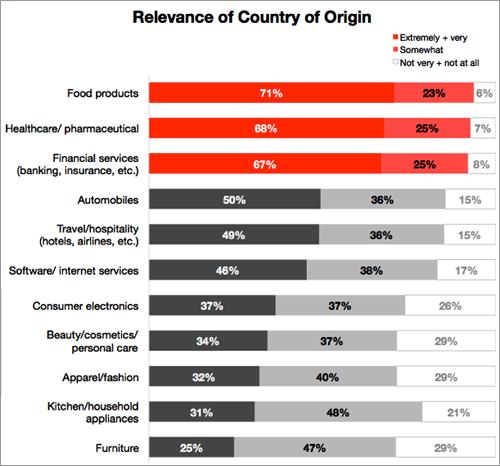 Based on our study, Americans rate brands that originate in other countries poorly in terms of management capabilities/leadership. However, it is not just foreign companies that have had their brand diminish based on senior leadership. It should be noted that many brands like Nike and Starbucks had difficulties when their iconic leaders (i.e., Phil Knight and Howard Shultz) stepped down. Even Apple took a step back when Steve Jobs was ousted from the firm in its early years only to regain its luster on his return.

Country of origin is relevant to Americans for the majority of purchases. However, origin is most important in relation to food, healthcare and financial services products. This is likely because these purchases involve elements of risk and safety. A substandard T-shirt isn’t going to create lasting damage, but substandard food definitely could. Risking $10 on an unfamiliar smartphone adapter isn’t quite the same as risking your life on unfamiliar medical care or your life savings in an unfamiliar foreign investment.

Perceptions largely vary by type of product category, but American lag in the automotive industry, where they fall slightly behind European and Japanese brands.  Those “foreign” automakers are foreign in name only, however.  Recognizing the value of American branding, these companies have made great efforts to design and build in the U.S. whenever possible. Now the majority of foreign brands have American based manufacturing facilities, including Toyota, BMW, Honda, Nissan, VW, etc.

“Made in America” doesn’t necessarily mean that all of their products are manufactured here. One very successful company that actively employs this principle is Apple. Although many of Apple’s products are manufactured elsewhere, its packaging prominently features the legend “Designed by Apple in California.” Though a simple phrase, it ties the product to a complex, vivid set of expectations and perceptions.

In the current election environment, politicians are clamoring to promote job growth through a new wave of American manufacturing. This study certainly shows that Americans would look favorably on these products but at what price? It also shows that strong and resourceful leadership will be important to differentiate even an American brand from its competition.