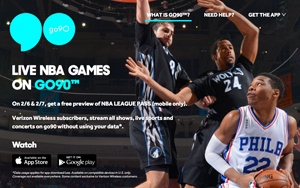 "Starting today, all go90-registered Verizon Wireless post-paid customers can watch all of their favorite go90 video content anytime, on Verizon's LTE network," the company stated in an announcement about the service.

The move comes around three weeks after Verizon rolled out the zero-rating service FreeBee Data, which lets companies arrange for their mobile content to be excluded from customers' data caps. Verizon typically charges customers between $30 a month for 1 GB of data and $100 a month for 18 GB.

Some consumer advocates have argued that broadband providers shouldn't be able to use zero-ratings programs to make their own video offerings more attractive than competitors'.

The FCC hasn't yet indicated whether it views sponsored data as problematic. The net neutrality rules broadly prohibit carriers from engaging in conduct that hinders the ability of consumers and content companies to reach each other online. When the FCC published those rules, it said it would take a case-by-case approach to evaluating whether data caps -- and exemptions from them -- are harmful.

Verizon isn't the only company to roll out "toll-free" data. AT&T did so in 2014, when it allowed companies like ad-tech firm Aquto, app developer and m-commerce software provider Kony Solutions, and health care company UnitedHealth Group to arrange for their content to be excluded from consumers' data caps.

Comcast also recently unveiled Stream -- a $15-a-month online video service that doesn't count against consumers' data allotments. Currently, some Comcast subscribers in test markets can only consume 300 GB of data a month before they are charged overages of $10 per 50 GB. And T-Mobile currently zero-rates video from 40 different providers as part of its controversial Binge On program.