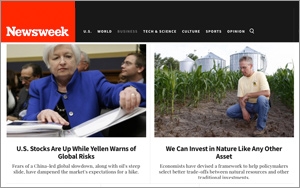 IBT Media has made the decision to drop Newsweek’s paywall Wednesday, and the Web site will move to a premium content model.

Previously, Newsweek.com allowed readers to access five articles for free each month before asking them to subscribe. Readers would also get a free tablet issue when they downloaded the Newsweek app—that will not change.

Some content on Newsweek's Web site will still only be available to subscribers.

Mitchell Caplan, CMO for IBT Media, told Publishers Daily that subscribers will still get access to Newsweek's weekly issue a full week ahead of other readers. They will also continue to benefit from the magazine layout in the tablet and print editions.

After a certain amount of time, the full issue will be free to all readers.

Caplan said that dropping the paywall will “increase our readership and drive up advertising revenue.” Newsweek has the benefit of having dual revenue streams, he said.

In other words, the more page views, the better.

“We are opening the doors to readers to allow them to engage with our stories, share them and keep coming back,” Caplan said.

In the U.S., Newsweek has about 100,000 subscribers, when combining print and digital offerings. The magazine has slightly more digital-only subscribers than print subscribers.

“We know that if people can access and engage with our content, they'll want to keep coming back for more,” Caplan told Publishers Daily.

Newsweek was acquired by IBT Media in 2013. In December, IBT Media completely redesigned the magazine’s Web site, giving it larger headlines and image sizes and optimizing it for mobile.

“Since the homepage is no longer the front door for most readers, we are treating every article like a homepage,” Jim Impoco, editor in chief of Newsweek, stated at the time.

The decision to drop the magazine's paywall is the opposite of what Tribune Publishing have done. Tribune recently announced that it would set up a metered paywall model.
magazines, pay wall, web sites
Next story loading