How Many Affluent Millennials Are There?

Recently the Millennial generation has been the focus of many marketing pundits' articles and columns. No matter the slight variations defining the ages this generation encompasses (we define them as consumers born between 1981 and 2000), there are many out there, about 86 million in total, including those of high-school age. When marketers start to focus, though, on adults 18 or older, the number falls to about 73 million Millennials. The following exhibit segments that entire generation by four typical age segments many marketers use. 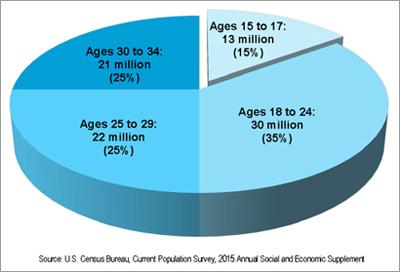 Notably, the largest segment consists of 18 to 24 year olds. When we look at the three adult Millennial segments by their current buying power, using recent U.S. Census Bureau statistics (in the following exhibit), this generation’s age segments become much more interesting. 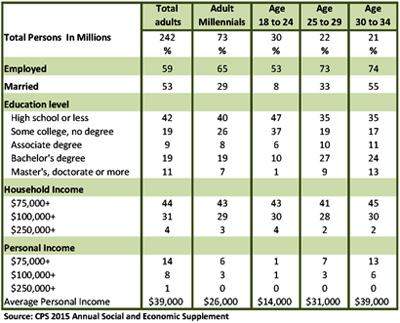 When marketers consider targeting Millennials by their household incomes and are seeking “affluents” for their brands, depending on their definitions of affluence, the percentage of Millennials who are deemed affluent ranges from a high of 43% (31 million) if the starting point of affluence is defined at $75,000 (which is what we often do); 29% (21 million) are affluent when that is defined as starting at $100,000 (which another well known survey does); and finally 3% (2 million) are affluent when it’s defined as starting at $250,000…which a fair number of luxury brands tend to do. However, if we look underneath the household-income numbers at the individual consumers' personal buying capabilities, as defined by their personal incomes, the landscape changes dramatically.

During their early adult years (18 to 24), a majority of these Millennials go into the workforce or military, while a good number start college and graduate schools, and a portion of them graduate and get better entry-level jobs. Notably, though, their personal incomes on average are quite low (about $14,000) and so they are not personally affluent by anyone’s definition unless their parents support them or they are married (8%) and their spouse works, which in reality means many of them have little or no personal buying power.

When Millennials reach the ages of 25 to 29, almost three quarters (73%) are now working, and a third are married and establishing their own households. Their personal income is clearly growing, on average now around $31,000 (still below the average American consumer’s level of $39,000). Finally, when they reach 30 to 34 in age, about half (55%) of the Millennials are married and have their own households, and their average personal income has now reached $39,000, the same as the average American consumer.

Depending on how marketers to the Millennial generation define their target groups and on the prices of what they are selling, they may want to reconsider how they define affluence and how they plan to reach their affluent prospects. Bottom line is that, while there surely is a potential Mother Lode among the Millennials, it must be mined very, very carefully.

2 comments about "How Many Affluent Millennials Are There?".
Check to receive email when comments are posted.
Read more comments >
Next story loading