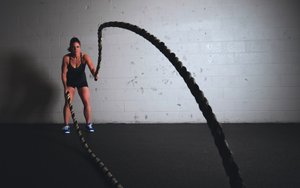 The 2016 CrossFit Games Open competition just wrapped up another successful year. It is on to the regionals and then the finals for the elite competitors. However, that is not the whole story of the The Open. The real action is what happens at the affiliate level – the grassroots and how it embodies a new type of branding.

Douglas Holt’s “Branding in the Age of Social Media” (Harvard Business Review, March 2016) is a thought-provoking look at how social media has changed traditional branding. He writes about the rise of crowd culture and the fact people gravitate to authentic content created by everyday people rather than by brands. Ten years into the social era, he surmises that the classic notion that people want to be “friends” or follow brands on social media may be ineffective.

Traditional models of branding are lagging since the advent of social platforms. He talks about a new paradigm of cultural branding, and CrossFit has followed this model for growth and success. Forbes estimates the CrossFit ecosystem (CrossFit HQ, affiliates, equipment makers, service providers, etc.) to be a $4-billion business with more than 11,000 affiliates worldwide.

A look at some of Holt’s rules for cultural branding applied to CrossFit can give marketers a road map for their own brands.

1. Map to the cultural orthodoxy – CrossFit founder Greg Glassman broke with conventional wisdom on fitness and had The Big Idea. Corporate gyms packed with machines and people working out with headphones doesn’t work. Glassman surmised there had to be a better way. He recognized these “globo-gyms” were missing a key element – community. There was a crowd culture waiting to be tapped that wanted to do constantly varied and challenging body weight/weightlifting workouts as part of a tightly knit community.

2. Locate the cultural opportunity – The internet and social media became the vehicle to spread the word. Glassman came up with the concept of an “open source” system of exercise in tune with the wide open culture of the viral web. Workouts and instructions are posted for free, anyone can follow from anywhere. Affiliates are charged a fee for the name, but it is not a franchise system with regimented rules. CrossFit is a classic digital platform company; they own no gyms and don’t sell equipment, DVDs, supplements or shakes. They bring together affiliate owners and customers and leverage the network effect to great success.

3. Target the crowd culture – CrossFit first took hold among the military and public safety officials who still embrace it. Then it spread to early adaptors who were looking for a new way to exercise that embraced a back-to-basics ethos and was quantifiable.

4. Diffuse the new ideology – CrossFit is essentially a media and training company publishing a journal, educational videos and offering training certifications. They have done an excellent job with the CrossFit Games site, turning it into a mini ESPN.
The lesson for companies is to turn their focus away the social platforms and reliance on advertising and towards the real center of digital power – crowd cultures. To that end, CrossFit hit upon a brilliant idea last year; they added a scaled version workout to The Open. That gave the vast majority of members who have not mastered the high skill movements a chance to get involved and build on the grassroots culture.

Many gyms (including mine, CrossFit 5 Plus) started inter mural competitions that centered on building community. It ended last Friday with a brutal workout. A few dozen people gathered to challenge themselves, and see if they could find a place within their psyche they didn’t know they had. It’s a microcosm of entire experience.

The members who finished quickly were congratulated for their efforts, but the greatest support came for those who struggled to complete the workout. The community cheered to push them beyond the mental and physical limits they thought they had. It took a while for them to finish, but their score really doesn’t matter. It is about the satisfaction and inner peace they achieved and the sense of accomplishment. It gives them confidence that carries over to their personal and professional lives. That inspiring scene is the crowd culture CrossFit has tapped into, and it’s how they reinvented the concept of fitness.