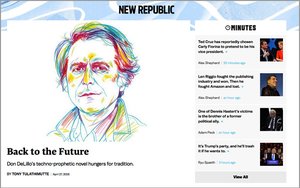 Eric Bates has been appointed editor of the New Republic, the magazine announced Tuesday.

According to a memo to staffers from Hamilton Fish, the magazine’s new publisher, Win McCormack, who acquired the New Republic in February, will serve as editor in chief and Bates will report directly to him.

Bates will lead the day-to-day editorial operation of the New Republic across the magazine, its Web site and related platforms.

Prior to the New Republic, Bates was executive editor of Rolling Stone for nearly a decade. He also served as investigative editor of Mother Jones and editor in chief of Southern Exposure.

In 2014, Bates oversaw the launch of First Look Media site The Intercept, and directed the site’s reporting on classified documents leaked by Edward Snowden.

McCormack naming himself EIC is part of a tradition for New Republic owners; Chris Hughes and Marty Peretz also held it, according to Politico Media.

Hughes served as EIC when he acquired the magazine in March 2012, but later hired Gabriel Snyder to take on the role in December 2014. As Publishers Daily previously reported, Snyder announced mid-April that he was stepping down to make way for new editorial leadership, a move he said is common when a publication has new ownership.

McCormack stated that an editor for the New Republic has to “meld relevant investigative journalism, fact-based political analysis, and incisive cultural commentary, with a leavening degree of irony and humor,” as well as “stake out a philosophical position that is bold, coherent, and meaningful.”

“Eric's range of experience and accomplishment, and his evident versatility, make him one of the few editors qualified and ready to suit up and meet this set of challenges head-on,” McCormack added.

“Journalism serves us best when it challenges our assumptions and takes us somewhere unexpected,” Bates stated.

“The New Republic has a crucial role to play in the debates of our era – by providing a unique and exciting combination that combines idea-driven journalism and deep-dive reporting that is diverse, thoughtful, and transformative,” he added.