I responded that my syndicated survey does measure the mainstream marketplace (the under $100,000 household-income segment) as well as all the affluent marketplaces and that with my survey he could choose his household-income threshold according to how his brand defined affluence. After reviewing the statistics he requested from me, he told me he was astounded my survey indicated that, of the 67 million adults who reported they bought one or more luxuries in the past 12 months, 37 million (a majority of all luxury consumers) stated they had household incomes less than $100,000.

This marketer was correct in thinking that a majority of luxury buyers are not measured by all syndicated surveys. I then told him that when I was the CEO of another syndicated survey, a number of luxury brands talked with me about that survey’s not measuring what some luxury marketers called "mainstream" Americans — consumers who aspire to live a more luxurious life and from time to time buy a lower-priced luxury product or service.

As the following exhibit from my current survey indicates, mainstream Americans do report they buy luxuries, especially personal luxury goods — some 25 million mainstream consumers, about the same number of personal luxury goods purchasers included in the more affluent income segments measured by the other survey. As noted in the exhibit below, "mainstreamers" are also very important buyers of other luxury categories—especially fine wine, beer, and spirits. 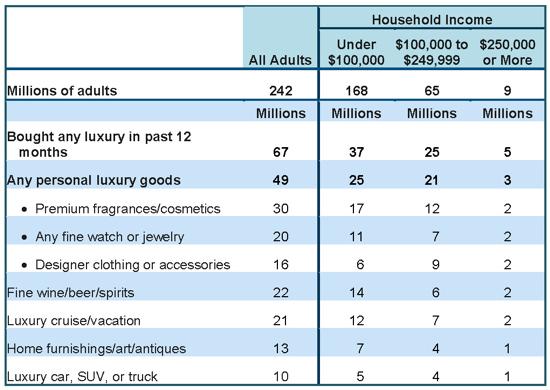 In only one category, designer clothing or accessories, were there more luxury buyers from the $100,000+ household-income segments (11 million, compared with 6 million with household incomes under $100,000). Notably, the same number of "mainstreamers" as affluent consumers reported they bought a luxury vehicle (5 million).

1 comment about "'Mainstreamers' Matter As Affluence Intersects With Luxury".
Check to receive email when comments are posted.
Next story loading