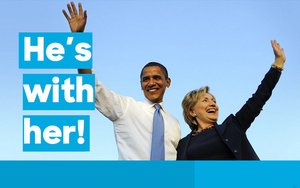 Hillary Clinton will soon leverage President Barack Obama's expansive email network for her presidential campaign, according to party insiders and as first reported by The Hill.

President Obama’s re-election campaign in 2012 revolutionized the role of email marketing in political campaigns, and the President is estimated to have raised over $500 million via the email channel.

Obama’s email marketing team raised the majority of online donations to his 2012 campaign, which totaled $690 million from 4.5 million supporters, according to a MarketingSherpa case study. The average donation was $53.

Although Obama’s email list is several years old at this point, staffers have kept it fairly active by using it as a channel to promote the President’s legislation and to garner support for fellow Democratic candidates and politicians.

Trump, who self-financed his own primary run, is now in dire need of an infusion of cash for his campaign and trails Clinton’s campaign coffers by at least $41 million, according to the Federal Election Commission.

Trump sent an “emergency” fundraising email to subscribers over the weekend -- the first time the Republican candidate asked for donations from his email subscribers.