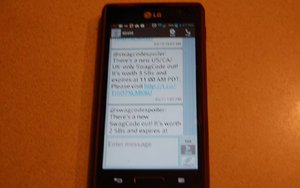 Twitter is asking a federal judge to authorize an immediate appeal of his ruling that the company may have violated a robo-texting law.

"Immediate appeal would materially advance the ultimate termination of the ... case," Twitter argues in a motion seeking permission to appeal to the 9th Circuit Court of Appeals.

The microblogging company adds that the matter "raises important questions" about how to interpret Federal Communications Commission regulations surrounding texting. "If the Ninth Circuit agrees with Twitter’s interpretation of the FCC’s Order, Twitter would be entitled to summary judgment, and this case would be over," Twitter argues in papers filed recently with U.S. District Court Judge Vince Chhabria in the Northern District of California.

Twitter's move marks the latest development in a lawsuit filed by Taunton, Massachusetts resident Beverly Nunes, who says the company violated the Telephone Consumer Protection Act by sending text messages to her after she purchased a cell phone with a recycled number. That law prohibits companies from using automated dialing systems to send SMS ads to people without their consent. Companies that violate the measure face damages of up to $1,500 per message.

Nunes alleged that she received text messages from Twitter in November of 2013, immediately after purchasing the cell phone. At one point, Nunes allegedly received up to six messages a day, all from Twitter's short code. Many of those texts appeared to promote an online coupon site. For example, one message allegedly included the phrase “There’s a new Swagcode out,” and directed her to click on a link.

Earlier this month, Chhabria rejected Twitter's argument that it's not responsible for text messages that alert people to new tweets by other users.

Twitter contended that it didn't make the phone calls. Instead, according to Twitter, the "maker" was either the user who posted the tweet, or alternatively, the consumer who signed up to be notified about tweets via text.

Chhabria rejected the company's stance, writing "either interpretation is too far removed from the ordinary meaning of the phrase 'make any call.'"

Twitter now says the 9th Circuit should decide who initiated the text messages that Nunes says she received.

"A reasonable jurist could disagree with this court’s determination that it 'would be contrary to the plain meaning of the statute' to find that a person can make calls to her own number," Twitter says.

Nunes is expected to file a response by early August.