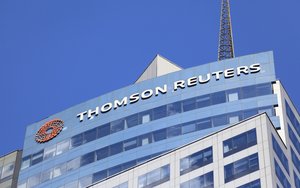 Following its third-quarter earnings report, Thomson Reuters announced today it plans to cut 2,000 jobs — about 4% of its 48,000 employees around the world.

It will also swallow up to $250 million of a cost-cutting charge in the fourth quarter as part of a massive company restructuring.

The cuts will be made in 150 locations across 39 countries, according to a memo from CEO Jim Smith. They will affect the Financial and Risk division and the Enterprise, Technology and Operations business.

Thomson Reuters generates about half of its revenue from its financial and risk business, according to The Wall Street Journal.

The cuts at Thomson Reuters, parent company of business and financial news publication Reuters, will not effect the editorial department.

“We do not expect any impact on headcount in the newsroom,” a spokesman for the company told The Guardian.

In a statement, the company said the cost-cutting charge was “intended to accelerate the pace of the company’s transformation program by further simplifying and streamlining the business.”

The company said the subsequent savings from the cuts will be of a “similar magnitude” to the restructuring cost.

“Some of the savings [will] be reinvested in the business,” the company said.

"It's about simplification and taking out bureaucracy and taking out layers, all of which have added complexity and slowed us down," Smith stated. "These actions are not driven by any reaction to market conditions or in any way coming on the back of underperformance."

Thomson Reuters’ third-quarter profit beat analysts’ estimates, thanks to growth in the Americas. Thomson Reuters shares gained more than 4% in both New York and Toronto.

However, the company’s profits fell to $286 million, compared with $293 million a year earlier. The company expects to hit closer to the lower end of its revenue forecast for the year.

Revenue at Reuters News fell 1% year-on-year to $73 million in the three months to the end of September, and reported a $61 million loss for the quarter, up from $51 million compared to this segment last year.
employment, journalism
Next story loading