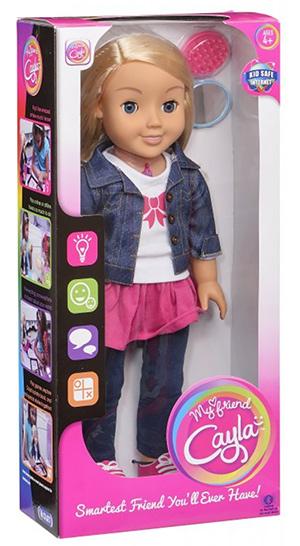 Genesis Toys, which sells the popular connected toy My Friend Cayla, is violating federal laws regarding children's privacy,  advocates say in a new complaint filed with the Federal Trade Commission.

"This complaint concerns toys that spy. By purpose and design, these toys record and collect the private conversations of young children without any limitations on collection, use, or disclosure of this personal information," the Electronic Privacy Information Center, Campaign for a Commercial Free Childhood, Center for Digital Democracy and Consumers Union allege in papers filed today. "They pose an imminent and immediate threat to the safety and security of children in the United States."

The advocates say the interactive doll My Friend Cayla, as well as the i-Que Intelligent Robot, conduct and store "conversations" with children, in violation of the federal Children's Online Privacy Protection Act. That law prohibits providers of online services aimed at children from collecting personally identifiable information from children younger than 13, without their parents' consent.

Both My Friend Cayla and i-Que allegedly contain a Bluetooth microphone and speaker. The toys also come with apps, which connect to the toys via Bluetooth technology, according to the complaint.

Genesis has a procedure for obtaining parental consent, but the advocates say the company doesn't do enough to verify that users' parents have actually consented to the alleged data collection. According to the advocates, the app for My Friend Cayla requires users to solve a math problem, but the app always presents users with the same equation -- 11 plus 16.

"Genesis makes no effort to verify or ensure that the person providing consent is the parent," the advocacy organizations allege. "Requiring users to periodically answer a simple mathematical equation when opening the Cayla application has no relevance to the identity or age of that user and is not reasonably calculated to ensure consent of the child’s parent."

The advocates also say that the Cayla doll engages in undisclosed product placement. The doll allegedly comes programmed with phrases that reference Disney movies. "For example," the complaint says, "Cayla tells children that her favorite movie is Disney’s The Little Mermaid and her favorite song is “Let it Go,” from Disney’s Frozen. Cayla also tells children she loves going to Disneyland and wants to go to Epcot in Disneyworld."