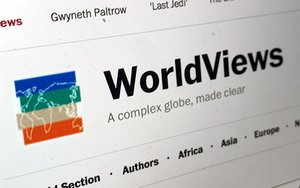 The Washington Post has launched a newsletter called Today’s WorldView, its first product created for a worldwide audience and part of the Post’s “emerging focus on actively growing international readership,” the company stated.

WaPo has over 25 million international readers. In 2016, it experienced an 89% increase in its global audience in fourth-quarter page views, compared to the same period in 2015.

“With the expansion of our international audience, we felt it was important to build on our strong foreign-news reporting and begin experimenting with ways to specifically serve the interests of these readers,” stated Frederick J. Ryan, Jr., publisher of The Washington Post.

Today’s WorldView newsletter will go out every weekday and will be anchored by foreign affairs reporter Ishaan Tharoor. He will lead the newsletter with “The Takeaway,” which will look at how President Trump will affect “the global picture,” according to a spokesperson.

“We know that audiences abroad are hungry to make sense of how a new American president grapples with a complex world,’’ stated Douglas Jehl, the newspaper's foreign editor.

He said the newsletter will be “a guide for understanding this critical question and will illuminate friction points, as well as common ground between Washington and the world.”

Today’s WorldView will feature reporting by WaPo's U.S. and foreign correspondents, commentary from its Global Opinions team and curated stories from other international publications, as well as video and photos.

Ryan called the newsletter the “first step” to reach more people globally. The newspaper will closely monitor the results of the newsletter and determine what works best and apply it to the company’s efforts to engage readers overseas this year, he added.