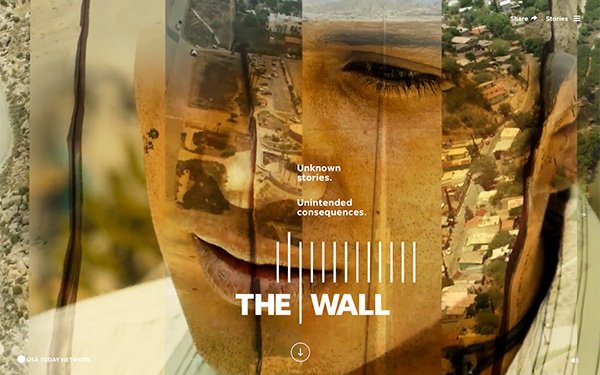 The USA Today Network has unveiled an ambitious project to document the border wall with Mexico. It collaborated with local newsrooms in California, Arizona, New Mexico and Texas to produce a mix of virtual reality experiences, aerial and 360 videos, interactive maps, documentary reports, photos, podcasts and articles.

The project, called “The Wall,” was created using drones and LIDAR (light detection and ranging) technology.

Over 30 reporters, videographers and photographers participated in the project, which took nearly a year. Local papers, such as The Arizona Republic, The Desert Sun and the El Paso Times led the reporting on the feature, partnering with USA Today reporters.

Maribel Perez Wadsworth, SVP and chief transformation officer at USATN’s parent company Gannett, told Publishers Daily: “This project is a great example of how our newsrooms are leveraging innovative technologies, such as LiDar data and photogrammetry to create realistic 3D models that place the viewer on the ground, at the border, as realistically as possible."

She added the effort takes digital storytelling to "new heights."

"The Wall" aimed to answer one question: is President Trump’s campaign promise to build "a great wall" on the border with Mexico actually feasible — and what could the consequences be?

One of the findings of the project: Building a wall in mostly wide-open Texas would require disrupting or seizing nearly 5,000 individual parcels of property.

Nicole Carroll, vice president of news and editor of The Arizona Republic, stated: “We’ve examined the border from thousands of feet in the air and from a tunnel 70 feet underground. We’ve roamed the ocean and desert with Border Patrol agents and the hills with armed vigilantes. We’ve learned something new at every turn.”

Another goal of the project was to record how much of the wall exists, as well as the towns and homes along the border, before President Trump goes forward with his plan to build more.

USATN and The Arizona Republic received a $28,000 grant from Journalism 360, an immersive news initiative funded by Google News Lab and the Knight Foundation, to tell an important national story through new technology.

"We were in the press pen at the Trump rally last fall in Prescott Valley, Arizona. Supporters all around us were chanting, 'Build the wall. Build the wall.' There was such passion for the idea. We felt it was our role to help people understand what would be involved," Carroll told Politico’s Morning Media about their decision to cover the border with Mexico.

The project lives on a hub on USA Today, but it will also run in all of the network’s 109 local properties, print and online.