Social media is a landscape of daily strategies, conversations and influences. It picks up every new day just like we do, caffeinated and ready to converse with old friends and new faces. Then again, this routine is sometimes interrupted by pure brilliance, unexpected comedy and the most mic-drop-worthy moments that will have you talking about it for the rest of the week. I’ve highlighted three different brands below that have done just that on Twitter, absolutely slaying the social media limelight.

In all honesty, Oreo deserved a Super Bowl XLVII ring after their Twitter cleverness in 2013. Who remembers when the Superdome had a power outage early in the third quarter of the NFL title game that matched the San Francisco 49ers against the Baltimore Ravens? The gasps, the beer spills, the screams and laughs at the TV screen. Emotions ran high as viewers and attendees were clueless as to what just disrupted the biggest game of the year.

Oreo, on the other hand, put its genius brand voice to work on Twitter in the midst of chaos. What better way to break the power outage ice than with a cookie pun? Within the 34-minute interruption, Oreo’s social media wizards seized the moment. 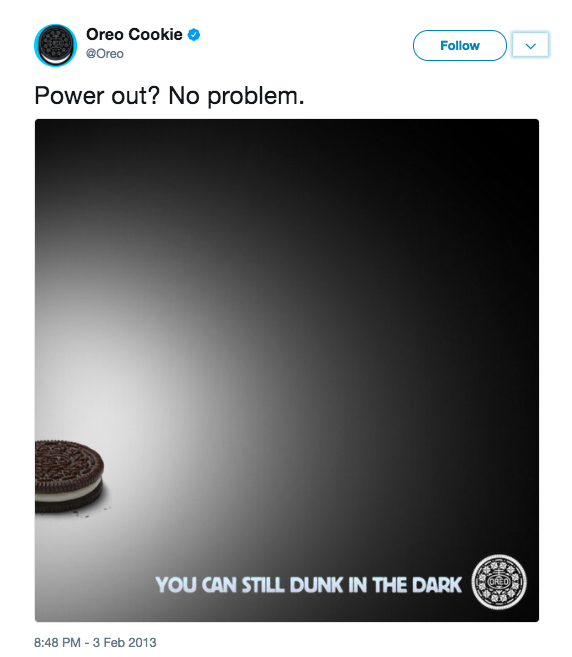 The tweet caught rapid fire and has been retweeted over 15,000 times. To this day, when I think of social media greatness, this instant classic in social media history is notoriously unforgettable.

There’s something extraordinary that can happen to a brand voice when its personality comes to life. This particular brand needs no introduction, but in case you didn’t know that their fall anthem of a coffee drink has its own Twitter account, let’s toast to Starbucks’ @TheRealPSL.

That’s right. Feel free to embrace all things basic and fall with me, because Starbucks created a character off of its renowned Pumpkin Spice Latte and gave it a hilariously witty Twitter account. Born into the social media world in 2014, this idea conceived greatness on every level of a brand voice. The Real PSL usually appears around late-August and then hibernates after October 31, spreading its much-anticipated charm to its 115K followers.

The Real PSL knows it has a loyal fan base and replies to tweets from around the world with a hint of attitude and a whole lot of love. Give yourself a well-deserved break (and treat) this afternoon — take a few moments to visit PSL’s Twitter account. Life is better with a little sassy pumpkin spice. ’Tis the season, right? 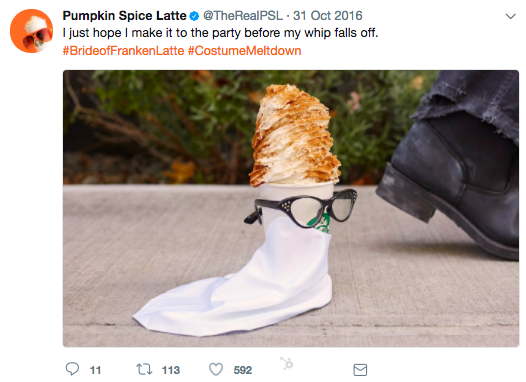 3. The Wendy’s Roast That Left Tears of Joy

There are epic moments on social media, inspiring hashtags, breaking news—and then there’s a brutal roast to humanity that is too hilarious to stop reading. Wendy’s. You’ve forever created your own spot in every social-media-loving person’s heart.

Let’s just get it out in the open. We’ve all thought it at one point or another: Insults are sometimes funnier than compliments. Wendy’s gets that and does not hold back, even in the slightest, when prompted. It’s like they have their own deck of Cards Against Humanity and embrace every single topic with undeniable wit.

The Wendy’s roasts have gone viral before, and sneak up every once in a while, to make you laugh about the comebacks that you wish you had in your daily life. It’s a dose of evil and pure joy all at the same time.

Wendy’s, you are goals. Savagery, but goals. Be still my heart. 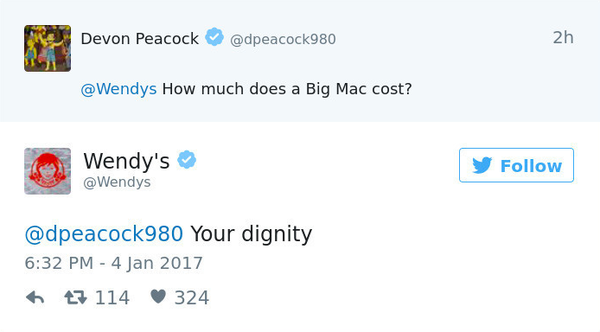 And now that I’ve highlighted three brilliant food voice brands, I’m craving a PSL, a Wendy’s No. 1 Combo and an Oreo cookie for dessert. Don’t judge. Who’s with me?