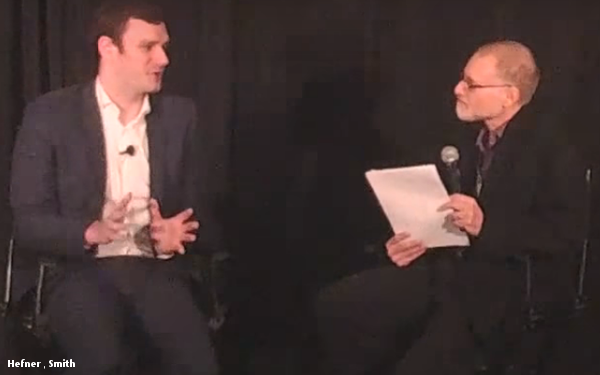 Since becoming Chief Creative Officer of Playboy Enterprises last year, Cooper Hefner, the youngest son of the company’s founder, Hugh Hefner, has been spearheading the brand’s charge toward digital and away from print.

The younger Hefner explained the changes he made and will soon unveil at the MediaPost Publishing Insider Summit on Monday.

Hefner’s biggest announcement: Beginning next year, Playboy will completely revamp its website and put up a paywall. He told MediaPost’s Steve Smith during the interview that in early 2018, Playboy.com will look “vastly different” from what it is now, with a “completely” different user experience that will mostly be hidden behind a paywall.

Hefner returned to the Playboy company last summer, after a year and a half away from the business, following disputes with its senior management over the company’s direction. Hefner did not agree with the “CPM model” of the site or the decision to remove nudity from the magazine.

Hefner is only the second Chief Creative Officer at Playboy Enterprises, his father, who passed away in September, the first. Cooper Hefner brought nudity back to the magazine’s pages earlier this year.

He also shook up its business model.

“We’re just never going to be able to generate as much revenue as we would behind a paywall,” Hefner said. “We would be more interested in creating content for individuals who really care about our brand — 2 million to 3 million. That audience is a lot more valuable than attracting 30 million uniques a month.”

“What we see with the media properties that are actually cash-flow positive is they all exist as a subscription business. We’re lucky to be in a position where we can actually leverage our IP in the same way that The Wall Street Journal and The New York Times can,” Hefner said. “The idea is to transition a lot of the clout that still exists in the magazine to dot com.”

Playboy will target a younger audience on its digital platform.

Hefner admitted it is a challenge to convince millennials, “who are not necessarily comfortable spending on content unless you are talking about Netflix or Hulu,” to pay for a subscription. He predicts a lot of international subscriptions - one of Playboy’s biggest licensing markets is China.

Hefner’s focus on Playboy’s site reveals another change for the brand — a move away from the print product. “We are shifting away from putting a lot of effort into the magazine,” he said.

“My dad put a tremendous amount of emphasis on the publication,” he said, because in his father’s mind, “the magazine is and was ultimately responsible for everything else that came along with it.”

Going forward, the company will invest a “tremendous amount more” into video.

“We are doing the exact same things that competitors like Complex and Vice and others are doing,” Hefner said. The push into video is “based on the fact we understand that millennials and Gen Z are consuming it far more than the written word.”

Playboy is also looking into emerging technologies, like augmented and virtual reality.

"We are in one of those spaces, and I can assure you that you will see our brand in that space.”