Thanks to a significant cash infusion from activist billionaires David and Charles Koch, Meredith has made a binding bid to acquire Time Inc. in an all-cash deal valued at $2.8 billion.

Meredith said it secured a total of $3.55 billion, including a $650 million preferred equity investment from Koch Equity Development, to fund the deal, but stated:

“KED will not have a seat on the Meredith Board and will have no influence on Meredith's editorial or managerial operations.”

“Meredith wanted to buy Time Inc. back in 2012, but didn’t want Time magazine,” former Time magazine Editor Richard Stengel tweeted following the deal’s announcement this morning. “The difference now is the Koch brothers money. Even though they won’t have a seat on the board, hard to imagine they won’t influence the editorial side.”

"We are adding the rich content-creation capabilities of some of the media industry's strongest national brands to a powerful local television business that is generating record earnings, offering advertisers and marketers unparalleled reach to American adults. We are also creating a powerful digital media business with 170 million monthly unique visitors in the U.S. and over 10 billion annual video views, enhancing Meredith's leadership position in reaching Millennials." 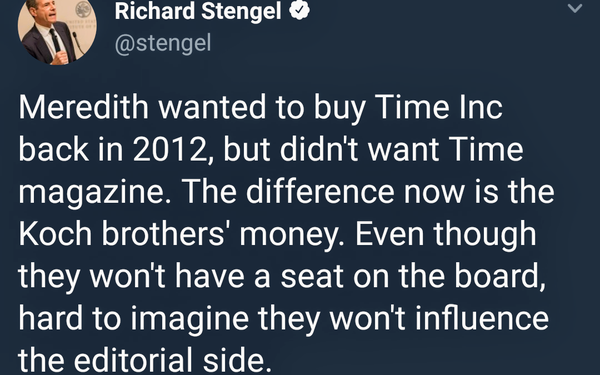