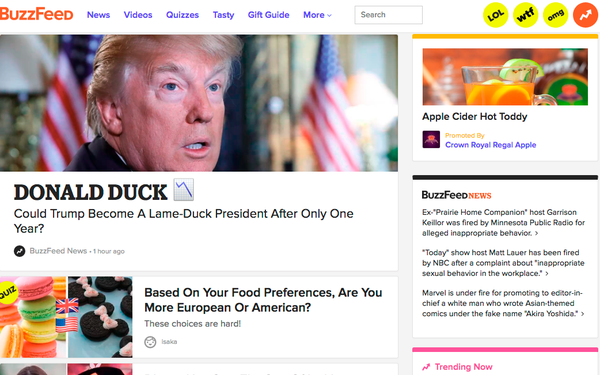 BuzzFeed, long the darling of native digital publishing models, is hitting its brakes following a weakening of advertising demand. The company said it is laying off about 100 employees in the U.S. -- less than 10% of its global workforce -- and restructuring its advertising sales organization “amid a tough digital media market.”

In an email to the company's staff, CEO Jonah Peretti announced Greg Coleman is stepping down as BuzzFeed’s president and would take on an advisory role.

The company attributed the attrition to a “tough time” in the broader digital media marketplace, an assertion that doesn’t necessarily ring true based on respected industry tracking sources.

While digital isn’t expanding at the exponential rates it experienced early in its evolution, it is still experiencing healthy double-digit rates of expansion.

According to a revised 2017 forecast released this week by Pivotal Research Group analyst Brian Wieser, digital ad spending expanded 21% in the third quarter.

On Tuesday, MediaPost reported the latest monthly tracking data from Standard Media Index indicating digital ad spending among the major agency holding companies remains quite healthy early in the fourth quarter. According to SMI, digital ad spending expanded 11% in October, beating the overall 7% expansion in spending from the holding companies by 57% for the month (see live data below). 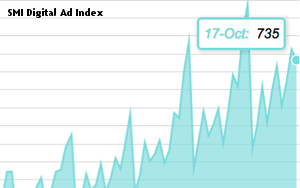 A more likely explanation for BuzzFeed’s woes isn’t that the digital ad marketplace isn’t healthy and expanding, it’s that it is being divvied up by an increasing number of players, including programmatic sources that are creating efficiencies for the demand-side and driving margins down for the supply-side.

Earlier this year, some news organizations reported that BuzzFeed was contemplating and initial public offering in 2018, so Peretti’s reorganization could be an effort to get the company’s margins in a position that would be palatable to Wall Street investors.

In the staff email, he detailed how the restructuring would impact BuzzFeed’s U.S. business operations, including sales, creative, client services, ad solutions and marketing.

“As we reshape our Business team, Greg Coleman has decided to take the opportunity to transition into a new role,” Peretti wrote, adding, “Before joining BuzzFeed, Greg helped me set up the ad sales leadership team as a senior advisor to the company, and he has decided to return to that role after a strong three-and-a-half-year run as president.”

Peretti went on to give a vote of confidence for BuzzFeed CRO Lee Brown, noting he “will continue to be critical, and I’m grateful that he will step up and report directly to me on the senior team. Lee is a strong, dynamic leader, and I’m looking forward to partnering with him in a bigger way to build our future.”