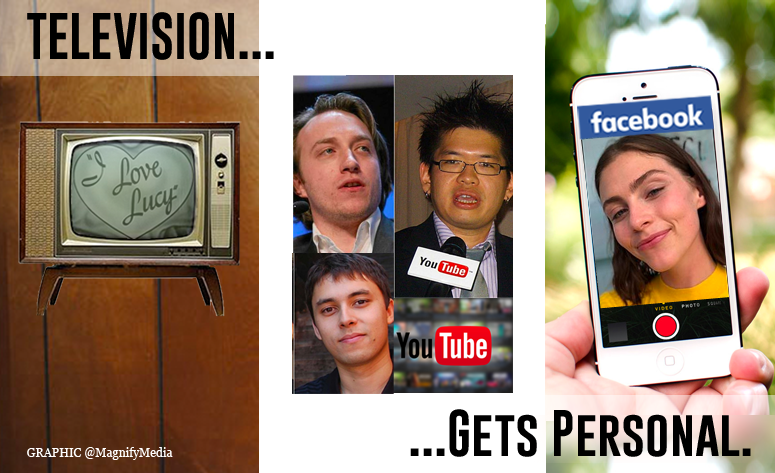 Video is fraught with possibilities, potential, and import.  And yet,  today it’s mostly a collection of false starts and half-measures.

Video is trapped in a economic model of the past, and while there are moments of extraordinary brilliance that can offer us a glimpse into the future, they burn bright and then mostly fade away.

Why is video so “old media,” even as the web advances?

Let’s start with history,  then we’ll jump ahead.

Video began as television: black-and-white pictures on a big box in the living room. And television was a 2.0 version of radio, only with moving pictures added to the sound.

And television was, from the moment of its birth, free. Give away the programming, and make money by selling access to the audience.  Television advertising was the real product  the big innovation — and it created a powerful new way to sell products to a national audience.

A television add touched deep into the soul of a consumer, making cigarette smoking cool, turning fashion models and actors into role models and athletes into powerful endorsers and brand ambassadors.

Fortunes were made when a television advertisement delivered a message that connected with consumers.

Then, in 2005, YouTube lit up the web. The numbers were staggering. The growth was fantastic. The feisty little startup was burning server cash like crazy, and within 18 months of its launch it was sold to Google for 1.65 billion dollars.

At the same time, MTV had a hunch that its viewers were anxious to get up off the couch and become participants in TV. A TV entrepreneur had been running “Viewers News,” a video segment on  “BROADCAST: New York.” (Disclosure: That entrepreneur was me). “Viewers News” became an MTV Series called “MTV Unfiltered.”

The series confirmed what I’d believed for a long time, that TV’s actual calling was much more than passive,lean-back viewing. It wasn’t a one-way medium, but a powerful two-way pipeline of connecting, sharing and learning, of ideas, conversations, and knowledge.

There were early cynics. When MTV viewers called the 800 number and suggested a story they wanted to share, they were Fedexed a camera to record with. It was before the iPhone, so a personal video recording device was not yet invented. "But why wouldn’t people just keep the camera?” hard-boiled TV execs would ask

How little they knew. Audience members wanted to connect, with the deeply human need to be heard, be understood, and to get feedback from a direct human connection. An on-air promo soliciting story ideas from viewers that ran only eight times resulted in more than 12,000 calls to the “MTV Unfiltered” 800 number.

Even as YouTube grew, “Unfiltered” had a head start. MTV had audience, and contributors wanted to be heard. Was it a bit of Andy Warhol’s 15 minutes of fame? Sure it was. But so was YouTube. To be visible was to come out from the shadows and be relevant.

And so internet video remains, stuck between the old video as a marketing medium, and the new video as a powerful mode of self-expression and information transfer.

Now to the future.

Facebook has positioned itself to be a next-generation video platform. With 2.07 billion monthly active users, Facebook understands that video is a language that crosses boundaries and connects users.

It’s easy to think that the only two ways video will be economically viable is either advertising-supported or subscription. But there’s a third way, and Facebook has already begun to lay the tracks. Facebook, Instagram, and SnapChat all are fueled by contributions created and shared by their users. There’s no revenue share offered. The payment is in social currency.

The shift from professional to community-contributed content threatens to upend existing business models. And advertisers, who pay the bills and keep the lights on, are making a concerted push to shift to quality, vetted, professional content. This, combined with the current scourge of fake news, threatens to push consumer contributions out of the limelight and back into the dreaded user-generated content paradigm.

But news is the outlier. Contributed content about information, events, conversations, and other knowledge-based video continues to grow exponentially.

Coming soon: video connects us all

There’s no doubt a new crop of tools needs to be invented to help organize, curate, and quantify the value and relevance of video content. Who is the maker? What is their POV? Are they an authority or an amateur? Do others who know the material validate it or question it? But those tools are coming. And a video-centric web is already visible, and growing.

Next stop: a real-time town square of video, authentic, authored, and honest.

That’s what the future holds.

online video
1 comment about "Video's Peril -- And Promise".
Check to receive email when comments are posted.
Next story loading