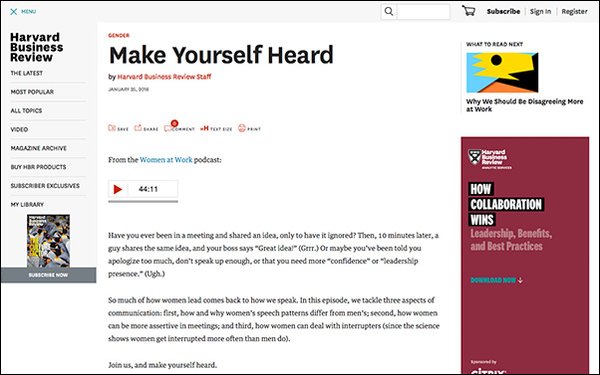 Coming off the success of its flagship podcast IdeaCast, Harvard Business Review is set to launch two new series.

IdeaCast, which is in its 12th year and is the top-ranked podcast in the Management and Marketing category on iTunes, receives more than 1.4 million downloads monthly. The podcast’s audience is 75% male.

The magazine was interested in investigating podcasts as a viable revenue stream as it moves more to the digital sphere, offering more options for a wider audience.

Enter Women at Work and "Dear HBR." "Women at Work," a pop-up series covering gender and the workplace, launched this week. "Dear HBR," an advice show covering work dilemmas, will launch February 6. The podcasts are each a way for HBR to have emotional and illuminating conversations about the way people interact at work.

Sarah Green Carmichael, HBR executive editor and co-host of "Women at Work" (with Nicole Torres and Amy Bernstein), told Publisher’s Daily of the inspiration behind "Women at Work": “HBR has been covering these issues around gender and women’s leadership for years. We want to rid the world of bad management — and that includes biased management.

According to Carmichael, the idea for "Women at Work" came when Maureen Hoch, editor of HBR.org, noticed that some of the most-read pieces on the site were about research surrounding gender at work. After the rise of the #MeToo movement, Hoch thought there could be a solid place and audience for a podcast about women’s experience in the workplace.

“We launched the podcast to really fill that need—we know our readers, and especially our female readers, are big multitaskers. We thought we could package these ideas into a format that is more consumable and user-friendly for people on the go,” she adds.

"Women at Work" is sponsored by Deloitte Digital. Per Carmichael, the podcast allowed editors to address an important issue and serve HBR’s audience while also growing the business.