The Damage of AMI's Dirty Deals 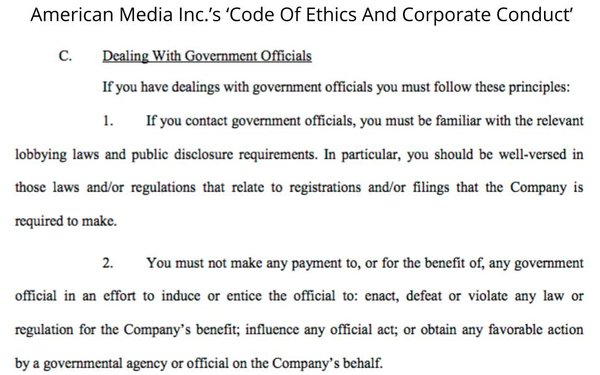 Last week, Ronan Farrow published a story in The New Yorker called “Donald Trump, a Playboy Model, and a System for Concealing Infidelity,” which outlined the connections between former Playmate Karen McDougal, her affair with Trump and the lengths American Media, Inc. went to protect the future president.

The story recounts in detail the aftermath of the affair between McDougal and Trump. David Pecker, AMI’s C.E.O. and chairman, who considers Trump a personal friend, has long been a purveyor of the “catch and kill” technique. That happens when a publication buys a story to protect those who it could hurt.

In this case, Pecker’s buddy, who was running for the country’s top office.

In August 2016, McDougal, in exchange for a fee of $150,000—45% of which went to three men involved in the deal—and a regular column about aging and fitness, signed “a limited life-story rights agreement granting A.M.I. exclusive ownership of her account of any romantic, personal, or physical relationship she has ever had with any ‘then-married man.’”

Farrow continues: “Her retainer with [attorney Keith M.] Davidson makes explicit that the man in question was Donald Trump.”

Still uncertain of what she is and is not allowed to say, McDougal speaks about being silenced by a contract she didn’t completely understand when she signed it.

As troubling: AMI has a board and shareholders, all of whom are presumably aware of the practices taking place at the company, and who are, by default, complicit in these practices.

(AMI has issued two statements dismissing the allegations in The New Yorker story and says it will "respond to these meritless claims.")

The company also has a detailed “Public Reporting” statement, which would lead one to believe its practices are not in accordance with its guidelines.

For example, one reads: “No information should be concealed from the internal auditors, the independent auditors or any other accountant engaged in the performance of an audit or review of the Company’s financial statements.” Another states: “The Company’s accounting records must not contain any false or intentionally misleading entries, and no undisclosed or unrecorded fund or asset of the Company shall be maintained or established for any purpose.”

In addition to disclosing the ways Trump has found allies in certain media outlets, journalists would perform a public service by investigating how these deals are produced, unmasking the boards and slates of individuals behind powerful media companies that are able to destroy or control a life with one bombshell story.

In this case, a media company spent a large sum of money to silence a woman and promote the political candidate of its choice—and potentially control him, as well.

Those tables can turn quite quickly, and it should never be up to a media company or the press, through murky and repulsive financial deals, to decide whose voice is heard and whose is muted, thereby dictating the political and cultural landscape of the country.

This story has been updated.
commentary, magazines, politics
Next story loading