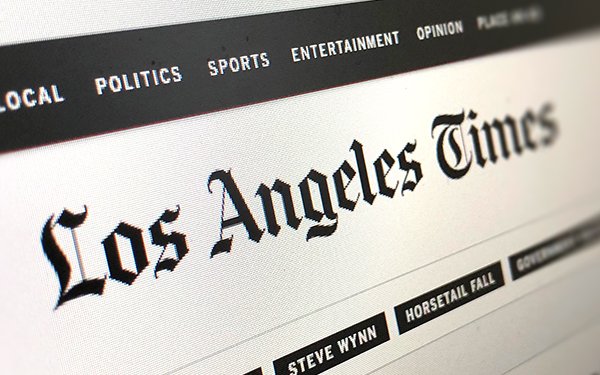 In February, Tronc Media, owners of the Orlando Sentinel and Chicago Tribune, announced it would be selling the L.A. Times to Patrick Soon-Shiong, billionaire founder of Culver City-based Nanthealth, $500 million cash.

In a letter to readers printed in the weekend edition of the paper, Soon-Shiong wrote: “I believe that fake news is the cancer of our times and social media the vehicles for metastasis. Institutions like the LA Times and the Union-Tribune are more vital than ever. They must be bastions of editorial integrity and independence if they are to protect our democracy and provide an antidote to disinformation.”

The new ownership comes after a particularly tumultuous time for the newspaper, which has been a part of Southern California for more than 100 years. The newsroom, which once employed 1,200+ journalists in 25 foreign bureaus, has shrunk to 400 journalists with bureaus in Sacramento and Washington, D.C.

In addition, the stability of the newsroom, prior to Pearlstine, had been rocked with three editors in 10 months. Plus, in the last four years, five publishers have taken control at the company.

Before the sale, Tronc had planned to close the Washington bureau, leading to more layoffs. According to a piece in the L.A. Times, Soon-Shiong claims Tronc was planning to lay off an additional 20% of employees at the company.

Soon-Shiong will become executive chairman of the California News Group immediately and will relocate most of the company’s 800 employees to a building he owns in El Segundo by the end of July. He has invested millions in the El Segundo building to create a state-of-the-art home for digital and print journalism, including a test kitchen.

The L.A. Times reports that Soon-Shiong has reached out to veterans of the news business to help him during this transition.

“The last three months has been an amazing experience for me to really learn — I mean on a steep learning curve — about all the elements that are affecting this industry,” Soon-Shiong stated.

While Soon-Shiong acknowledges the challenges of turning a print publication into a viable digital entity — the paper claims only 138,000 digital subscribers — he said he is compelled to build the opinion section, invest in long-form journalism and videos, podcasts and special events.

He also plans to invest in the paper’s technology to allow for seamless publishing across platforms to reach new readers.

The L.A. Times is reportedly profitable and has a circulation of 690,000 Sunday and 440,000 weekday subscribers. The website receives 33 million unique visitors a month, per comScore.