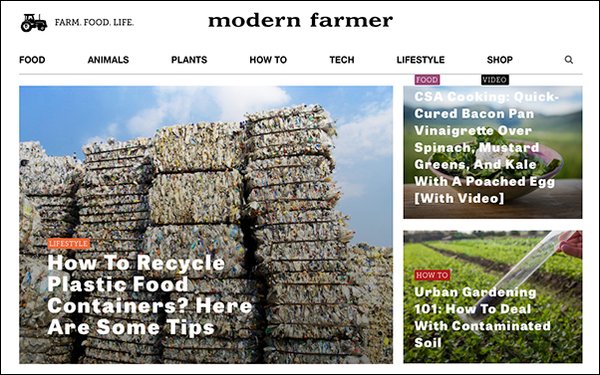 Modern Farmer announced it will become a digital entity as three of its editorial staff exit. Among those leaving is Sarah Gray Miller, editor of the publication.

The New York Post first reported the news. There was no comment as to why Miller was exiting the title.

Based in New York’s Hudson Valley, Modern Farmer has had a rocky five-year existence, despite being a perennial favorite with covers featuring blasé portraits of goats, pigs and other farm animals, articles focused on bringing a certain urbanity to farm life.

Serendipity struck within its first year of publishing. The title won a National Magazine Award, despite publishing only three issues at that point. No other magazine had ever achieved this record. Modern Farmer was an instant darling among the print set.

Giustra pushed Gardner early to make the magazine profitable, offering to trade ownership shares for more money to keep the publication afloat. Gardner was a minority owner of the title. She felt the title needed more time and money to become profitable.

In 2014, Gardner left the magazine, and a few months later, the remaining editorial staff departed. However, the title persisted, canceling a spring issue, then building up its editorial staff once again.

At the time, in a story with The New York Times, Giustra stated that a summer issue was underway with new staff that would “continue to reflect the high standards of reporting that Modern Farmer has had in the past.”

Miller, who was previously editor of Country Living and the founding editor of Budget Living—also a National Magazine Award winner—was hired in 2015.

A magazine spokesperson told the New York Post: “Modern Farmer Media has decided to move from a quarterly print operation, to a 24/7 digital magazine. We will continue to invest in the brand and our writers. We will be enhancing our digital platform in the months and years ahead.”