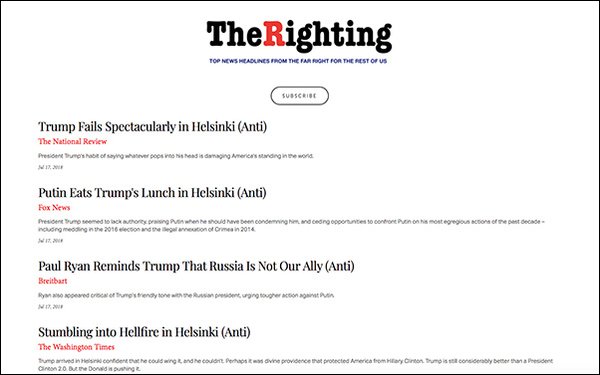 A number of leading right-wing websites criticized President Donald Trump’s remarks at a summit held in Helsinki with Russian president Vladimir Putin, according to TheRighting’s analysis of conservative websites.

TheRightingcalls it “a rare display of disapproval from right-wing media outlets who are usually supportive of the President.”

The website collected top headlines from conservative websites and labeled them as either anti- Trump’s remarks in Helsinki or pro- Trump’s comments. The headlines are overwhelming critical of his remarks, which praised Putin and did not publicly denounce Russia for interfering in the 2016 U.S. elections.

For example, the editorial boards at The Wall Street Journal and the New York Post expressed beliefs that Trump’s behavior at the summit will negatively impact future deals the U.S. may want to make with Russia, in the articles "Trump Showed Weakness with Putin" and "Trump's Failure at Putin Summit Will Come Back to Haunt Him," respectively.

The editor-in-chiefs at The Daily Wire and National Review published pieces criticizing Trump’s comments in Helsinki.

Articles from Breitbart and The Federalist criticize Trump’s habit of speaking without thinking about the consequences of his words.

An opinion piece from Fox Newspoints out Trump was praising Putin when he should have been condemning him. Another from The Washington Times highlights Trump’s apparent lack of preparation for the summit.

All of these sites were previously reluctant to comment on Trump’s language regarding Putin, which tended to praise him and his leadership.

Perhaps what was different this time is Trump railed against his own intelligence agencies on a global stage, while standing next to the Russian president. Trump refused to publicly condemn Russia for interfering in U.S. elections and attempting to undermine the outcome, despite the detailed charges in Robert Mueller's latest indictments. (Vladimir Putin admitted at the press conference that he wanted Trump to win.)

However, Trump’s comments, roundly condemned by ex-CIA director John Brennan and Sen. John McCain (R-AZ), were not entirely met with criticism from the right. Support for his behavior at the summit came from several conservative commentators and websites, including Rush Limbaugh, Lou Dobbs, Pat Buchanan and Townhall.