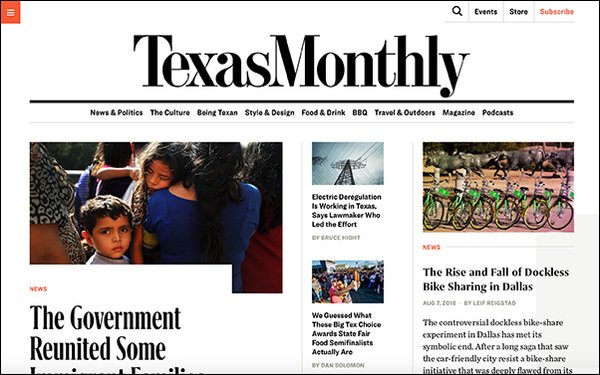 Last October, a study from OnAudience.com revealed that 26% of consumers were using ad blockers, an increase of 4% from 2016, resulting in a loss of more than $15.8 billion for publishers. This was before the introduction of Google’s Chrome ad-blocker software and the E.U.’s GDPR.

While publishers are still reliant on advertising dollars, consumers are becoming more resistant to actually viewing those ads.

On July 11, award-winning regional magazine Texas Monthly launched a campaign to get readers to whitelist the publication or sign up for its email newsletter.

Solution Set, a weekly report from the Lenfest Institute for Journalism and Solutions Journalism Network, took a closer look at the work Texas Monthly is doing, getting details from the publisher in the process.

So far, the results don’t signify a sea change in audience behavior, but they do point toward the need for transparency when approaching readers.

When readers using ad blockers land on Texas Monthly’s homepage, an interstitial pops up with a call to action: “To support our work and bypass this message, consider signing up for our weekly newsletter below or whitelisting texasmonthly.com within your ad blocker.”

Readers also have the option of opting out of the entire thing and continuing to read the site with their blocker on.

According to Texas Monthly’s director of digital strategy,Brett Bowlin, the number of readers who block ads were below industry average for the site, which receives 1.1 million monthly unique visitors. (It’s also worth noting that Texas Monthly doesn’t sell digital subscriptions, so it has no way of offering a pay-to-read access fee).

The publication has seen a slight decline in the number of readers using ad-blockers since the launch, but many exit the interstitial rather than sign up for the newsletter or view ads. The publication, however, has seen a jump in email subscribers, which now number 78,000.

The experiment has presented the publication with the opportunity to inform readers of a few important facts about its practices. Most important: it doesn’t share reader data. All of its digital advertising inventory is sold by staff at Texas Monthly rather than through third-parties or advertising networks.

Texas Monthly is also reinforcing the importance of email communication with readers, picking up some new ones in the process.

Going forward, Solution Set notes the magazine is considering a more moves after the test concludes later this month. For example, it might prohibit people from disabling the modal unless they sign up for the newsletter or whitelist texasmonthly.com