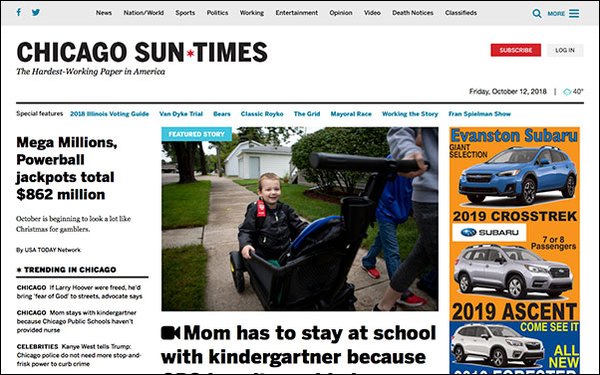 Last summer Vox Media announced it would begin to license its Chorus publishing software after successful partnerships with outlets The Ringer and Funny or Die. The Chicago Sun-Times is the first traditional newspaper outlet to partner with the media company and will redesign its website using Chorus.

The redesigned website is slated to launch early next year, and with it The Sun-Times will join Vox Media’s digital advertising marketplace called Concert. With previous licensing agreements, enrollment in Concert was required, but is now voluntary.

Nieman Journalism Lab reports the inclusion of Concert was a “significant selling point” for the newspaper, allowing for a more seamless look and experience for visitors to the site. It let the publication move away from programmatic ads.

Sun-Times officials suggested the move to Concert could affect staffing in advertising and web development at the company.

The Sun-Times has been searching for an easier-to-use site, after an earlier redesign led to “enormous switching costs” and the loss of thousands of articles that hadn't been archived. Management hopes the overhaul will simplify engagement for readers, reporters and editors.

In addition to building articles on the Chorus CMS, the software also allows publishers to monitor readership and distribute content across social media.

Eisendrath stated: “This is going to give us a huge leg up in terms of the tools journalists get and the user experience that our readers get.”

The financial terms of the deal were not disclosed.