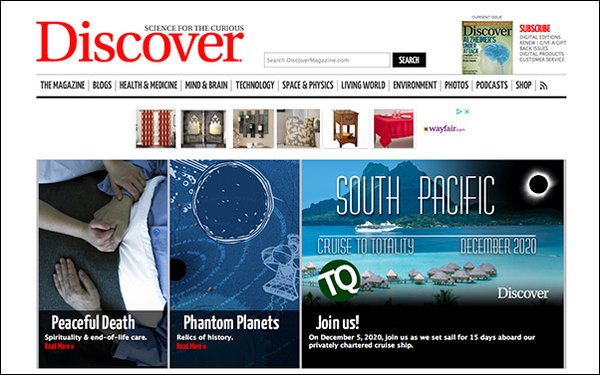 As it continues on the path of reinvention, Kalmbach Media Media has revealed a new strategy for its science division, which includes Astronomy and leading science brand Discover.

Dan Hickey, Kalmbach’s CEO, stated: “We’re laser-focused on exponential growth and transformation of our Science Group. Now, we have a set of strategic partnerships in place that take this expansion further, particularly with our Discover brand.”

Finally, to reach an international audience, Kalmbach will work with a global media consultancy and FIPP member Cue Ball to license Discover content globally. Cue Ball, which specializes in closing a range of cross-border deals, like strategic partnerships, licensing and joint ventures, will work with Kalmbach to find licensing arrangements for its brands in the “knowledge category.”

This latest move follows Kalmbach’s rebranding as Kalmbach Media last spring. As part of its rebranding, the media company launched a special-issue print magazine, Model Railroading: The Ultimate Guide ,that was an extension of its digital video channel MRVideoPlus.com.
At the time, Hickey told Publishers Daily the company was considering acquisitions and expanding its ecommerce reach. According to Hickey, 85% of the company’s revenue comes from its consumers.
content creators, licensing
Next story loading