'Time' Honors Slain, Imprisoned Journalists As Persons Of The Year 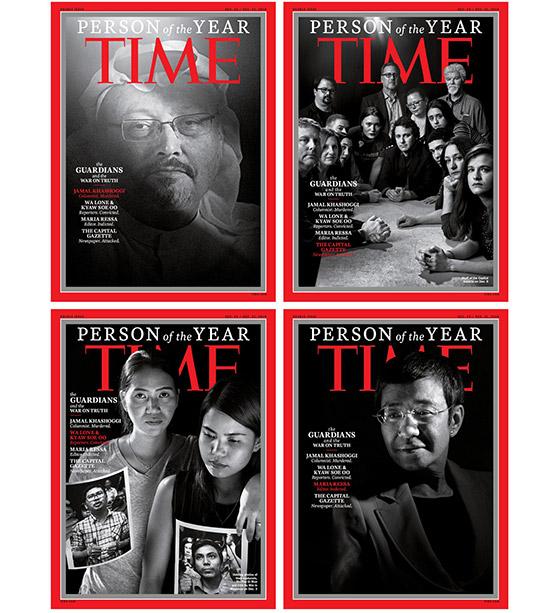 Time’s 2018 Person of the Year issue hits newsstands  this Friday, honoring “The Guardians” and addressing the War on Truth.

The people honored include Jamal Khashoggi, the journalist murdered at the Saudi Arabian consulate in Istanbul in early October, Reuters journalists Wa Lone and Kyaw Soe Oo, both imprisoned by the government of Myanmar, and journalist Maria Ressa, who was indicted in the Philippines.

"Guardians" also include The Capital Gazette, where five staff members were murdered by a gunman in Annapolis last summer.

Time Editor-in-Chief Edward Felsenthal stated: "Today, democracy around the world faces its biggest crisis in decades, its foundations undermined by invective from on high and toxins from below, by new technologies that power ancient impulses, by a poisonous cocktail of strongmen and weakening institutions.

“This year, we are recognizing four journalists and one news organization who have paid a terrible price to seize the challenge of this moment…. They are representative of a broader fight by countless others around the world who risk all to tell the story of our time.”

Felsenthal noted in his statement that as of December 10, at least 52 journalists have been murdered around the world.

“The old-school despot embraced censorship. The modern despot, finding that more difficult, foments mistrust of credible fact, thrives on the confusion loosed by social media and fashions the illusion of legitimacy from supplicants….,” writes Time’s Karl Vick in his cover story.