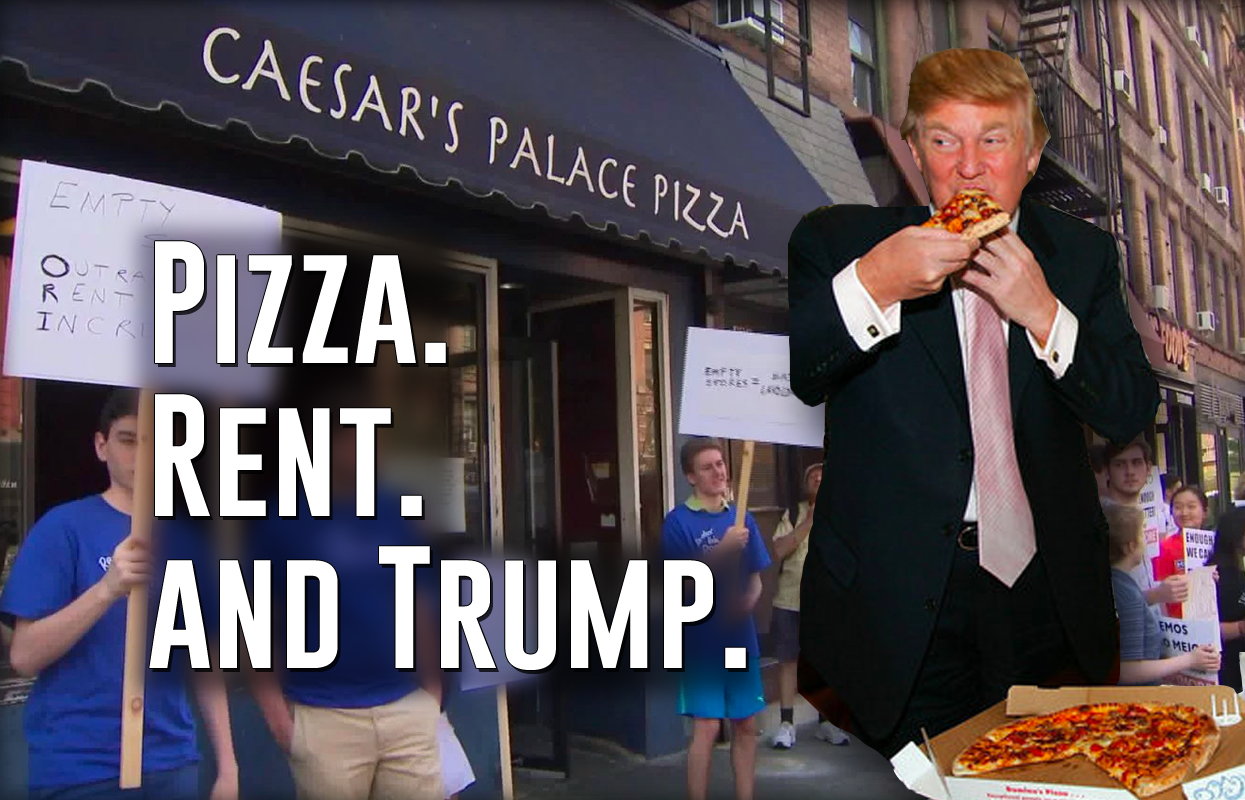 On my block, there are a lot of closed storefronts.

They used to be neighborhood restaurants, craft shops, a hardware store, a local pharmacy. All gone. The local blog reports their passing with funereal calm.

Each closing follows versions of the same timeline: owners who’ve been operating for a long time, costs rising… and then, with a consistent drumbeat: THE RENT. As leases come up for renewal, landlords double or even triple the rent.

These store owners are local legends. They post heartfelt goodbyes on their shuttered store windows. The landlords are faceless, nameless, entities. They don’t respond to requests for comment. They work in a land of spreadsheets and trend analysis. If a bank or a chain store will pay 3x the going rent, then rents must rise.

Which brings me, inexorably, to Donald Trump, and what he and his family have done to the tenants of his family’s aging real-estate empire.

"They were collateral damage as Donald J. Trump and his siblings dodged inheritance taxes and gained control of their father’s fortune: thousands of renters in an empire of unassuming red-brick buildings scattered across Brooklyn, Queens and Staten Island,” writes the New York Times in an article that would have been called a “blockbuster” if that word were not so overused in the exhausting coverage of Trump’s crimes and fraud charges.

The Times doesn’t pull any punches, noting that the rent increases in Trump buildings were "a hidden scam” as Donald Trump  “and his siblings set up a phony business to pad the cost of nearly everything their father, the legendary builder Fred C. Trump, purchased for his buildings. The Trump children split that extra money.”

You see, the buildings were rent-stabilized properties. Rent stabilization generally applies to apartments in buildings of six or more units constructed before 1974. Once in a stabilized apartment, your rent can be only be increased by a percentage determined by the Rent Guidelines Board.

But  there’s a loophole. The Trumps used a provision in the New York state rent laws, known as major capital improvement increases (MCI), to raise the rents in rent-stabilized buildings they owned in the outer boroughs. In many cases, those increases were based on fraud, according to the New York Times

The Trump family set up All County Building Supply & Maintenance, a fictional company that provided NO services. All it did was pad invoices “marked up by 20 percent, or 50 percent, or even more,” the Times reports.

This is important. Under the MCI provision, “when owners make improvements or installations to a building subject to the rent stabilization or rent control laws, they may be permitted to increase the rent based on the actual, verified cost of the improvements,” again according to the Times.

Which brings me back to my neighborhood, and the closed retail storefronts. Pricing out longtime local owners from street-level retail cuts at the heart of a community.

Caesar’s Palace Pizza on 84th and Amsterdam closed after 36 years in business. Pizzeria owner Dimitri Vezrakis said that the building’s new management company doubled the rent.  More than a year after the closure, the space remains an empty shell, and a hole in the heart of the neighborhood. A good slice of pizza remains elusive.

We’ve all been hit with charges that seem irrational and unjust. Spectrum cable raised my monthly rate for broadband by almost $35 a month. Why? Because it could. Airlines charge for baggage, seat assignments, food, or an aisle seat. Again, because they can.

So, when Trump fakes invoices and adds, let’s say, $10 to every rent-stabilized apartment, what’s the result? A single $10 increase on all of the 8,000 apartments in 1995, tenants’ total overpayment to date, would be in excess of $33 million. Nice way to make millions on nuisance charges on poor apartment dwellers.

There’s of course a line between opportunistic landlords who capitalize on New York’s valuable street-level real estate and a fraudulent system of faking expenses to bilk stabilized apartment rents. But it’s all part of an amoral continuum that puts profits before people.

Today, that ethos has taken away the last good slice of pizza in my neighborhood, and put Trump in the White House.

Maybe it’s time to think about the cost of all this. It’s more than just pepperoni.