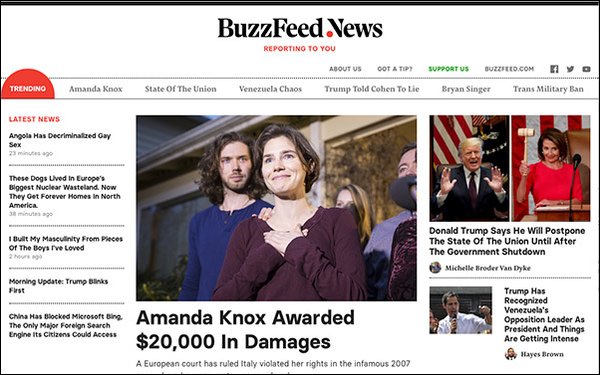 Digital-native pioneer BuzzFeed is reportedly gearing up to lay off 15% of its staff, or about 250 people, sources told The Wall Street Journal on Wednesday.

The layoffs are part of a restructuring that will allow BuzzFeed to invest in more profitable business areas, like content licensing and ecommerce. The cuts are also happening as the company attempts to avoid another round of fund-raising. Its last was in 2016, with $500 million collected and a valuation of $1.7 billion.

According the WSJ’s report, the company is also looking toward potential merger options with other digital media entities. The restructuring is intended to put it “on the path to profitability.”

The company hit its 2018 revenue target of $300 million, but business remains unpredictable.

BuzzFeed CEO Jonah Peretti said in a memo to staff: “Unfortunately, revenue growth by itself isn’t enough to be successful in the long run. The restructuring we are undertaking will reduce our costs and improve our operating model so we can thrive and control our own destiny, without ever needing to raise funding again.”

Over the last year or so, BuzzFeed has taken steps to stabilize revenue through selling ads on programmatic platforms and launching a membership program for its news business, BuzzFeed News.

BuzzFeed was a finalist for the 2018 Pulitzer, but that division has long been financially precarious. However, according to the WSJ, Peretti stands by its mission.

The news division recently came under fire when it ran a story about Trump lawyer Michael Cohen and his testimony to special counsel Robert Mueller. Mueller’s office, in a rare moment, issued a statement disputing the story, though it did not offer specifics.

The company underwent a round of big layoffs in 2017, when it cut around 100 staffers, after missing its revenue target of $350 million by 15% to 20%. Those lost jobs were mainly on the business side.

BuzzFeed also closed its offices in France in 2018, discontinued its production of podcasts in house and saw its BuzzFeed UK editor Janine Gibson step down this week.
employment, online publishing, web sites
1 comment about "'BuzzFeed' To Cut Staff 15%, Focus On Content Licensing, Ecommerce".
Check to receive email when comments are posted.
Next story loading