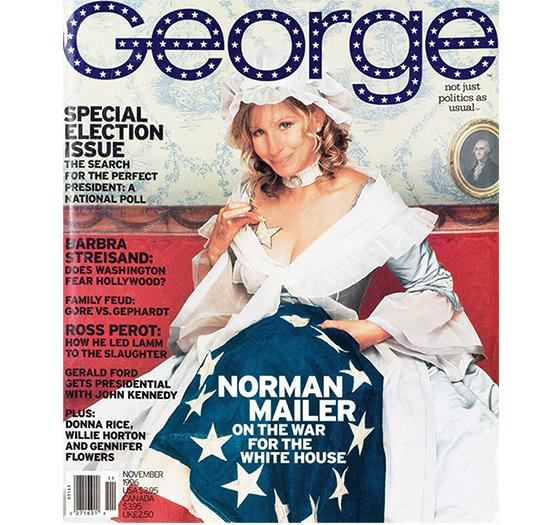 Anyone feeling nostalgic about the publishing industry should check out The Hollywood Reporter’s brief oral history of George magazine, published 1995-2001.

The late John F. Kennedy Jr. started the glossy in the mid-1990s, when magazines still mattered, even as the internet was being transformed from an academic experiment into a commercial medium. Magazine launches were still common occurrences, but no publication generated as much buzz as George.

JFK Jr.’s public persona as the heir to Camelot, the sobriquet for his father’s brief presidency, embodied George’s mix of Hollywood celebrity, politics and journalism. He had dallied with the idea of becoming an actor, which his mother nixed, and his string of relationships with actresses and models provided steady fodder for the gossip pages.

As the 20th anniversary of his death approaches on July 16, Kennedy is being remembered as a magazine publisher who could have been president. Instead, the mix of media celebrity and politics culminated in the election of tabloid favorite Donald Trump.

Kennedy started George a year before media mogul Rupert Murdoch created Fox News Channel as a hub for conservative commentary. Still, the news media were much more monolithic back then. The subsequent profusion of social networks, blogs and YouTube videos mean liberals and conservatives today are more likely to inhabit different media worlds, with little overlap among the news sources they trust.

George was notable for its covers of celebrities dressed as historical figures, like model Cindy Crawford as George Washington and actress Julia Roberts as Susan B. Anthony. But the publication eventually lost momentum and saw ad pages dwindle. Kennedy's death robbed the magazine of a charismatic leader and hastened its demise a year later.

George was an odd magazine that aimed to glamorize Washington in a way that only could be fascinating to people who are willing to pay six figures to sit next to George Clooney at a fundraising dinner. But garish displays of clubbiness among the Hollywood and Washington elite were disdainful to many voters outside the Beltway.

While aspiring to provide serious journalism, George only appeared 10 times a year and couldn't keep pace with swiftly moving political news. As a sign of the times, the Clinton-Lewinsky scandal broke in early 1998 on the Drudge Report, which reported that Newsweek editors were sitting on a story exposing the affair between the president and a White House intern.

The bold names that appear in DePaulo’s history are a reminder of Kennedy’s more centrist vision, including conservative commentator Ann Coulter, friend-of-Trump David Pecker and Kellyanne Conway, the pollster for George who ended up as Trump's winning campaign manager.

Pecker was chairman-CEO of George publisher of Hachette Filipacchi Media US Inc. before raising money to buy American Media Inc., which includes The National Enquirer, in 1999.

“I recognized not only the reader appeal, but also the advertiser interest it would generate,” Pecker said to DePaulo about George. “The first issue sold out with hundreds of ad pages, more than the September issue of Vogue at the time.”

Today, Pecker, who was granted an immunity deal in the federal investigation of Michael Cohen, is locked in a publicity battle with Amazon founder-Washington Post owner Jeff Bezos, who accused AMI of extortion and blackmail.

"Things in politics would be different if his plane hadn't gone down. The polarization and hatred would have to be less because he set a standard," Coulter said to DePaulo. "I mean, who knows? Trump still could have come along and wrecked everything, but even through Trump, life would have been better in politics, more interesting and more fun. Maybe there would be a President John."