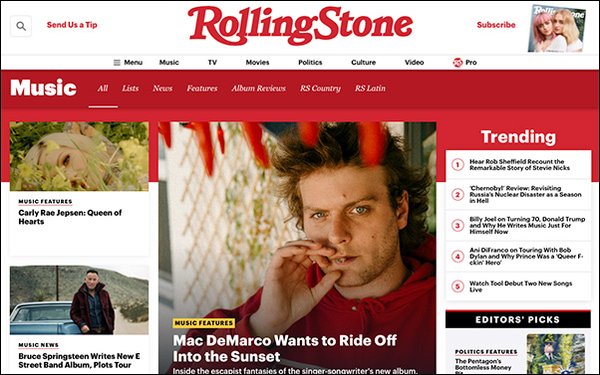 Starting Monday, Rolling Stone will begin to publish its own music charts, including the top 100 singles and top 200 albums in the U.S., reports Variety.

The charts are an attempt to top field leader Billboard and will be updated daily rather than weekly.

To support its lists with rich data, Rolling Stone will leverage its recent strategic investment in music analytics service BuzzAngle. Last summer, when Penske announced its deal with BuzzAngle it stated it planned to boost its key brands through data mined by the service’s stable of tools.

According to Variety’s report, BuzzAngle will provide Rolling Stone with data around daily sales, streaming and airplay of songs and artists and albums.

PMC CEO Jay Penske stated: “What’s imperative and exciting about our new Rolling Stone Charts is that it will present a transparent, granular and real-time quantification to accurately reflect listeners’ evolving interests and give insight into worldwide trends.”

Penske Media became full owner of Rolling Stone earlier this year, after securing a controlling stake in the brand in 2017.