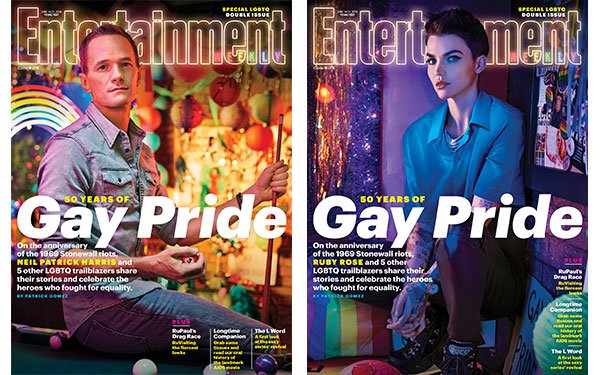 In celebration of Pride Month, Entertainment Weekly has unveiled the cover stars of its annual LGBTQ issue, along with plans for a celebration at the historic Stonewall Inn.

The issue also includes a tie-in with brand PopSockets, which created two rainbow-centric PopGrips to coincide with the issue’s release.

“In 2015, we started publishing an annual LGBTQ issue that has been well received by the industry,” Henry Goldblatt, EIC of Entertainment Weekly, told Publishers Daily. “It has been a great new addition this year to collaborate creatively with PopSockets on pride-themed PopGrips that benefit an important cause.”

The PopGrips are available for purchase online, with 50% of sales going to nonprofit The Stonewall Inn Gives Back Initiative, as part of the company’s Poptivism program.

“EW and PopSockets quickly found their common purpose in The Stonewall Inn Gives Back Initiative, the charity committed to eliminating the social intolerance that is profoundly impacting the lives of LGBTQ citizens throughout America and abroad,” Entertainment Weekly publisher Ellie Duque noted.

The PopSocket collaboration will be promoted across EW’s print, social and digital platforms, in addition to getting a boost from Goldblatt’s editor’s letter.

PopSockets CMO Becky Gebhardt added the company is “thrilled to be partnering” with the publication.

In addition to a roundtable discussion between the issue’s cover stars included in the issue, the stars and issue will be celebrated at a tie-in event at the Stonewall Inn, during the 50thanniversary of the Stonewall Riots.