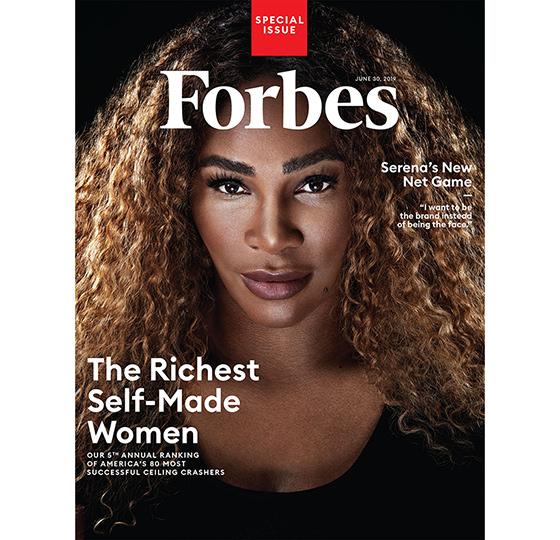 Forbes has redesigned its print magazine for the first time in eight years, modernizing the design and curating editorial to produce a more streamlined package and reading experience.

Chief Content Officer Randall Lane revealed the changes to the magazine at an event held at the Forbes on Fifth event space Tuesday night.

The changes debuted in Forbes’ fifth annual “Self-Made Women Issue,” which spotlights the most successful women entrepreneurs and executives, measured by their net worth.

Serena Williams is on the cover. The feature on the professional tennis player details her venture investments in a number of ecommerce, food, fashion and health businesses.

Williams is a “fresh business story,” Chief Content Officer Randall Lane said, because she is “young and well-known.” It is her first time on the list.

This year's list is its longest, with 80 women. (The list originally started with 50.) The goal is to grow the franchise to include 100 self-made women, said Luisa Kroll, Forbes assistant managing editor.

This was the right time to modernize the 100-year-old magazine, Lane said. “Forbes sits at historic highs” for its print, digital and social audience. The magazine has about 6 million print readers; Forbes.com has roughly 70 million.

“We wanted to reinvent the magazine from a position of strength, to be proactive,” Lane told Publishers Daily.

The updates to the print magazine were made with the understanding that people are consuming the majority of content on their phones.