'New York' Prints Trump-Free Issue To Contrast With Prior Editions 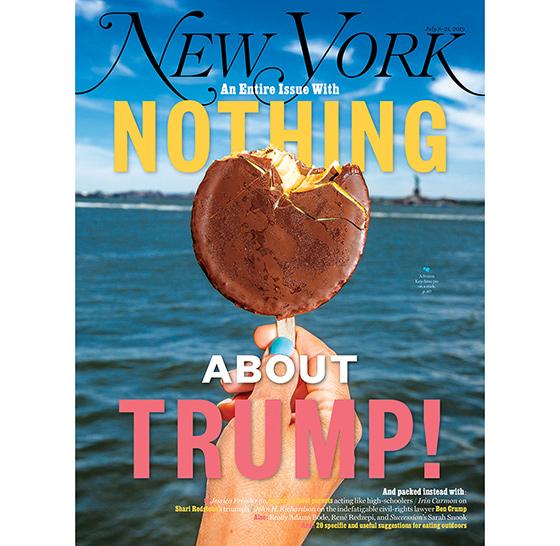 New York magazine is promising “an entire issue with Nothing About Trump” for its July 8-21 edition.

Other than the single mention of the president in that cover line, the issue claims to be packed with non-Trump stories, starting with contributing editor Jessica Pressler’s look at a “riot among the 1%” when Brooklyn’s oldest nursery school decided to become less old-fashioned.

As of this writing, the Trump-free issue hasn’t triggered a derisive tweet storm from the president, labeling New York as a “failed magazine run by a bunch of losers.”

Trump couldn’t escape the magazine two weeks earlier, when it ran an excerpt from an autobiographical book by writer E. Jean Carroll that accused him of sexually molesting her at a department store more than 20 years ago. The White House and Trump denied the report.

Blasting New York for not providing favorable coverage would be too predictable for Trump. Less foreseen was his multiple weekend tirades against Fox News, the network known for its conservative bent.

Trump took to Twitter on Sunday to say Fox “is now loading up with Democrats & even using Fake unsourced @nytimes a ‘source’ of information.”

It’s not clear what motivated Trump to lash out against Fox, although he may have been upset when the network aired a live broadcast from France after the U.S. women’s soccer team won the Women’s World Cup for a fourth time. A rowdy crowd loudly chanted “F— Trump” in the background, as Fox reporter Greg Palkot tried to explain the significance of the victory to viewers.