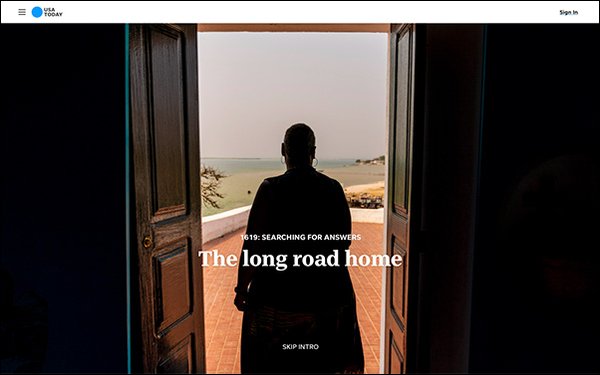 and USA Todayare producing editorial projects around the year 1619, a look back at the beginning of slavery in the United States and how it has shaped history.

On August 18, The New York Times Magazine published a special project commemorating the 400-year anniversary of August 1619, when the first enslaved Africans arrived in what would become the United States.

Spearheaded by Times journalist Nikole Hannah-Jones, the special magazine issue examines the legacy of slavery in this country, with stories, poetry and artwork from notable black writers and artists.

The Times also published a special section of the newspaper devoted to the history of slavery. The publisher printed and distributed hundreds of thousands of extra copies of the special issue and section to reach a larger audience.

The magazine and section are part of a big, multidisciplinary effort the Times is undertaking this fall, called "The 1619 Project."

The project also includes a podcast series featuring Hannah-Jones, which launched on August 20 on “The Daily” podcast. New episodes will roll out in September.

Separately, USA Today is taking a tech approach to the anniversary. Its “1619: Searching for Answers” project launched last week with an interactive augmented reality (AR) experience about the journey enslaved Africans made aboard the San Juan Bautista boat through the dangerous Middle Passage.

The AR interactive was written by author Dolen Perkins-Valdez, narrated by storyteller Tamara Winfrey-Harris and showcases a painting by artist Richard Press Sr.

The experience guides users through historical events researched and documented by USA Today’s editorial team, according to the publisher.

"1619" is the ninth project this year for the USA Today's emerging tech team. The team hopes to complete a dozen in 2019. The experience lives in the new augmented reality section of the USA Today mobile app.