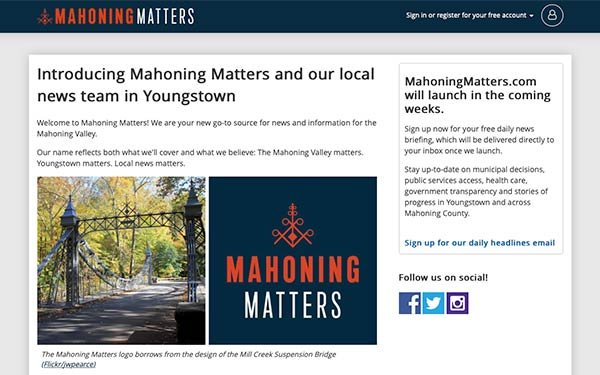 Just a few months after McClatchy and Google announced through The Compass Experience that they would be launching a media effort in Youngstown, Ohio, the new outlet has a name and set of top editors.

The digital-only outlet will be known as Mahoning Matters, backed by a team that long-served the now-shuttered Youngstown Vindicator.

The name is a nod to the Mahoning Valley and the direction of the publication, solidified after a series of forums at the Youngstown and Mahoning County Public Libraries.

Mandy Jenkins, general manager of The Compass Experiment, wrote in a blog post about the new name and hires.

“One of the messages that stood out [from the forums] to us was that we couldn’t just focus on Youngstown. Issues of public services access, health care, government transparency and stories of progress were not only key in the city, but across the Mahoning Valley. Hence why we decided to take a wider view,” Jenkins noted.

Mark Sweetwood will lead the outlet as its editor, following more than a decade as the managing editor of The Vindicator. Sweetwood brings 37 years of experience working in the local news business.

During Sweetwood’s tenure as managing editor of The Vindicator, the outlet won two first-place general excellence awards, as well as the First Amendment Award from the Ohio Associated Press Media Editors.

Joining Sweetwood are reporters Justin Dennis and Jess Hardin. Hardin started her reporting career at The Vindicator and Dennis also served as a reporter for the outlet.

Last month, The Compass Experiment announced it would partner with Village Media to use its CMS to power the Mahoning Matter’s website. Village Media has a proven track record at boosting local news outlets with its platform.

The new publication will adopt Village Media’s look and feel, in addition to its revenue strategy, which focuses on local advertising and content sponsorship.

Jenkins wrote in her post that the outlet is still looking at a late September launch.