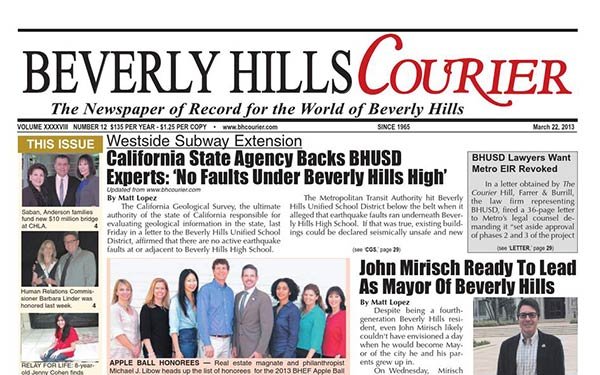 The Beverly Hills Courier has been sold to a Beverly Hills-based investment group. The new owner, BH Courier Acquisition, is led by managers John Bendheim and Lisa Bloch.

The change of ownership took effect August 30, but was announced publicly yesterday.

Bendheim and Bloch have worked in the real estate and entertainment industries, respectively.

The free weekly Beverly Hills Courier has changed hands only twice since its founding in 1965. The paper has a 40,000 weekly circulation.

Bendheim and Bloch are residents and business owners in the community. They will serve as publishers of the Courier and plan to make changes to editorial direction, content strategy and print and web design.

In a post on the Courier website, Bendheim and Bloch wrote: “As publishers, our goals include providing unbiased local news, trendsetting editorials on lifestyle and wellness, Hollywood and local philanthropic events with celebrities and community members, world-class travel and hospitality features, up-to-date real estate news, and international culinary and fashion expertise.”

The newspaper will also cover public safety and infrastructure needs and improvements, as well as school and community-service updates, they added.

“I know they will bring a fresh new perspective to the paper, while building on its historic past,” stated Beverly Hills councilman Julian Gold, M.D.

The Beverly Hills Courier offices will remain in the city’s Golden Triangle.