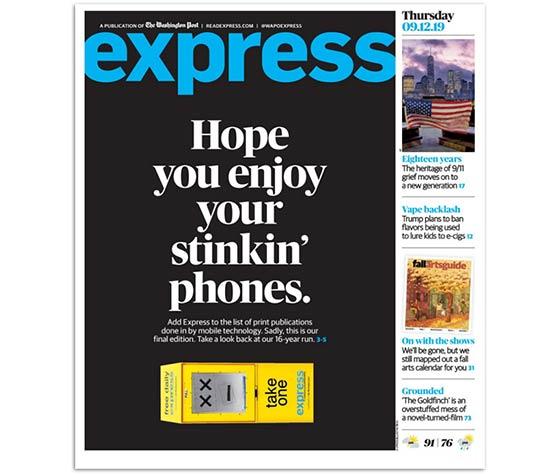 According to a report by The Washington Post on Wednesday, the newspaper, which once boasted a circulation of 190,000 and was profitable, had begun to lose money. Its circulation dropped to around 130,000.

The story also pointed to another recent development that led to its demise: The introduction of free Wi-Fi in the D.C. metro system.

The paper’s final issue nodded to this development with a cover line reading: “Hope You Enjoy Your Stinkin’ Phones” atop a yellow Express box laying on its side.

According to The Washington Post, the decision to close the publication so abruptly created a tense atmosphere between the Post’s union and the company.

The laid-off employees were fired without warning; they have no Guild protections because they were not allowed to join the union, The Washington Post Guild stated.

The Express’ format was similar to many other now-shuttered dailies from the late 1990s and early 2000s, when publishers were looking for a way to capture the attention of younger readers commuting in urban settings.

“When we launched in 2003, there was no such thing as an iPhone. It would be another year before Harvard students would start using a novel social network called Facebook to keep tabs on their classmates. No one was tweeting anything — or Insta-gramming or Snapchatting. And most of us still mocked our CrackBerry-addicted friends who just couldn’t wait till they got to work to check their email,” editor Dan Caccavaro wrote in the final issue.