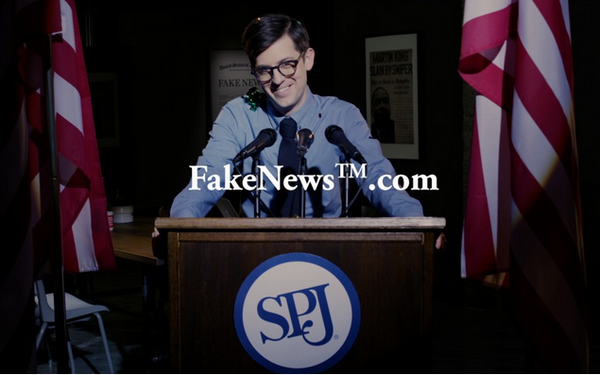 Can you trademark the words “fake news”?

The Florida Pro Chapter of the Society of Professional Journalists is going to find out.

Appalled by Donald Trump’s use of the term — 1,200 times since taking office, per Factba.se — and his war against the press, the local SPJ is taking action.

Labeling stories that are critical of him as ‘fake news’ is an effective weapon,” said Bloch. “We’re now seeing people using the term to dismiss truthful stories that don’t align with their politics or views. And that’s a major problem for healthy discourse in a democracy,” she told The Drum.

In a launch video, a journalist explains why they want the term trademarked. Trump employs it to denigrate real news. That is, any story that doesn’t put him in a positive light or includes information he cannot abide.

The video drives people to FakeNewsTM.com. It details how to spot actual fake news and what steps journalists take to report the truth.

The project was created in partnership with Canada-based creative agency Wax.

It’s unknown how the U.S. Patent and Trademark Office will react, but it a novel defense tactic by a profession under attack. Bloch notes in Teen Vogue that “sketchy videos about shooting news agencies are presented at a political conference … and bombs were sent to CNN.”

According to a study by the Knight Foundation and Gallup, Americans trust in the media is at an all-time low.

And while it doesn’t think it’s possible to trademark the words, SPJ Florida Pro is making a critical point about the importance of language.

“Referring to factual stories that are critical of your administration as FAKE NEWS (TM pending) is indeed trademark infringement,” the letter to Trump said. “You may not be aware, but your misuse of the term FAKE NEWS (TM pending) has greatly confused the American people and shaken their trust in the journalism that’s so vital to our democracy.

“If you fail to comply with our request, we may pursue legal action,” SPJ Florida added in closing. “But of course, this is satire — which is very different than what you refer to as ‘fake news.’ It might be asking too much for you to realize the difference.”

Separately, First Draft, a nonprofit that fights disinformation campaigns, just got a boost, reports the Associated Press. Craigslist founder Craig Newmark donated $1.5 million to the group to help train journalists. First Draft will provide free training to newsrooms and conduct 14 “simulations” of news events so reporters can recognize and stop misinformation, be it a tweet, doctored video, stories or misleading meme.

“We’re living in a period where bad actors, foreign and domestic, are attacking our democracy. I’ve been talking to a lot of reporters who realize that this is all hands on deck,” Newmark told AP.