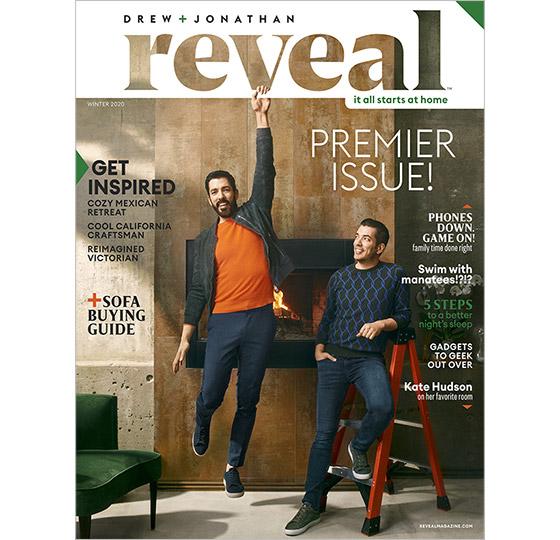 Meredith Corp and Drew and Jonathan Scott are set to launch the inaugural print issue of the Scotts’ new home-lifestyle quarterly magazine, Reveal.

The first issue, available online and on newsstands nationwide this Friday, features stories from celebrities, like Kate Hudson and Zooey Deschanel, home design and renovation ideas and life advice from an array of professionals. That's in addition to personal stories from the brothers. The Scotts’ parents, Jim and Joanne, also make an appearance.

Reveal will have an initial newsstand print run of 750,000, with a single-issue costing $9.99; it's printed on heavy stock paper with high-quality photography. Meredith has already begun selling $20 annual and $30 biannual subscriptions.

ADT, Arm & Hammer, B&G Foods, Delta, Kohler, Marvin and Tyson all signed on to advertise in the first issue, which had a set limit of advertising that sold out.

“Drew and Jonathan Scott are proven lifestyle tastemakers. Their ‘dream big’ approach will resonate well with a print audience, and we're excited about taking the chemistry they share with their millions of viewers onscreen to new and existing audiences in the print medium,” Doug Olson, president of Meredith Magazines, told Publishers Daily.

The pair are also responsible for Scott Living, a collection of indoor furniture, décor, textiles and bedding available at retailers Michaels, Lowe’s and Wayfair.

With Reveal magazine, they deepen their reach across media platforms and with audiences.

Jonathan Scott told Publishers Daily: "We love print and have always wanted to extend our message of living life to the fullest through this medium.”

Drew Scott added, "For us, it's always been about taking the small, simple steps that earn big results at home, work, rest and play. With a platform like this, we get to develop a consistent and thoughtful way of sharing great ideas and actionable insights with our audiences."

Meredith is also home to fellow HGTV stars Chip and Joanna Gaines’ quarterly lifestyle title Magnolia. After publishing 400,000 of its first issue in 2017, the third Magnolia issue counted 700,000 paid subscribers and Meredith reported it was printing over 1 million copies.

“We’re bullish about the quarterly subscription/newsstand model,” said Olson. “Producing high-quality content in a premium package is what our customers want and they’re willing to pay for it. This is a solid business for Meredith.”