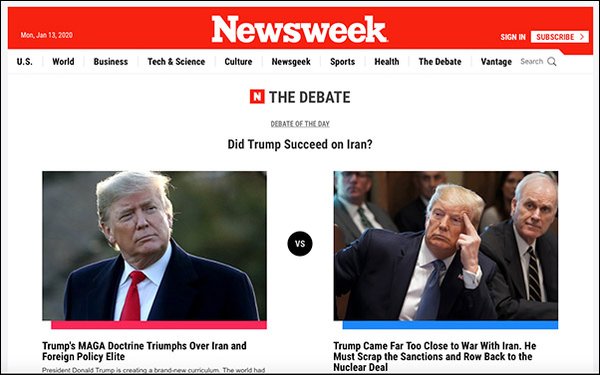 Newsweek is launching a new platform called The Debate, which will deliver a diverse set of viewpoints to its more than 60 million monthly readers and viewers.

The Debate, which aims to inform and challenge readers, presents eclectic ideas from various political, business, activist, academic and entrepreneurial spheres, while tapping into Newsweek’s stable of opinion writers.

“The Debate platform — which is independent from our newsroom — shows Newsweek’s firm commitment to offering views from across the recognized political and ideological spectrum. The objective is to promote meaningful conversation between those who hold opposing views,” said Dev Pragad, CEO of Newsweek.

“Creating space for informed debate is a service to our readers, consistent with our mission, and central to the healthy functioning of a pluralist society,” he added.

Seven major themes lead The Debate’s editorial mission: Brexit and the Future of Europe, the U.S. Election, the Robot Economy, the Response to Climate Change, the Future of Privacy, Reimagining Cities and the New Middle East.

The magazine will soon add new voices to its debate platform, such as Nigel Farage and Anthony Scaramucci.

“Newsweek has always prided itself on being a platform for diverse voices and points of view,” said Nancy Cooper, Newsweek’s global EIC. “Our goal is to facilitate engagement, not agreement. In the age of hyper-partisan media coverage and a toxic social-media environment, that mission is even more important and relevant to our work today.”