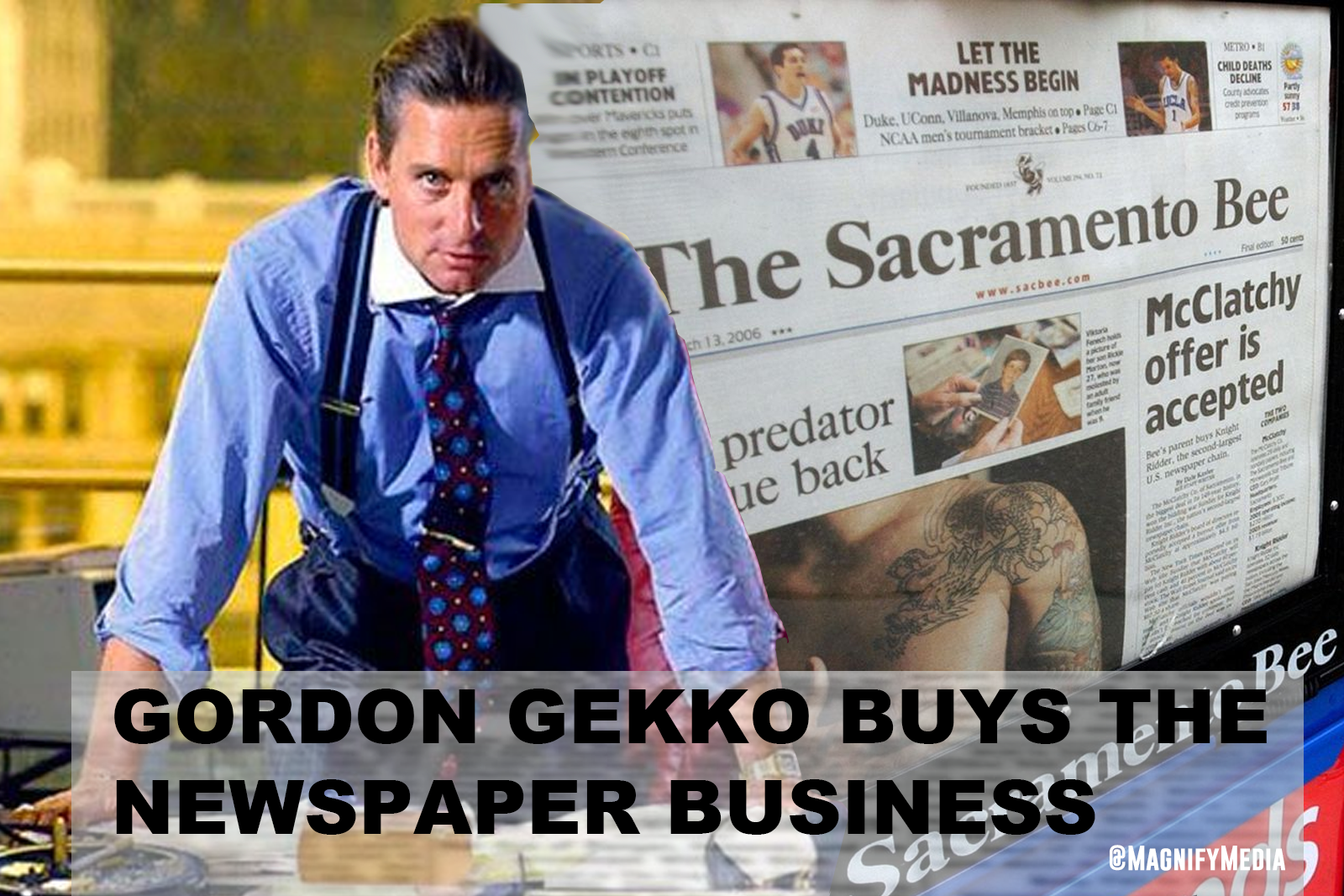 When McClatchy filed for bankruptcy this week, news industry insiders were saddened, but not surprised. Meanwhile, in an unrelated case, the owner of Newsweek was found guilty of financial fraud.

Unrelated, but together they signal a significant change in the nature of news. There are old trusted brands hanging on by a thread, but who owns those brands has gone through a remarkable change -- with little notice.

Here’s the point that matters: News is now owned almost entirely by financial entities whose motives are troublingly clear. They want to make large returns on their investments, even as the nature of the news business and the changing behaviors of readers and platforms make a renewed investment in innovation critically important.

As The New York Times has reported, the new owners of the news business are almost entirely private equity firms. Private equity is the new name for a financial mechanism formerly known as an LBO: leveraged buyout firms, which  got a bad rep for buying up companies and selling out their assets for a quick buck.

Today Fortress Investment Group owns Gannett, the nation’s largest newspaper group. Fortress is owned by the Japanese firm SoftBank (notable for its wild investment in WeWork). SoftBank’s money comes from the sovereign wealth fund of Saudi Arabia. (cue “Howard Beale: “Who IS CCA???” — the fictitious corporation, also with ties to Saudi Arabia, that owns the fictitious UBS TV network in the movie “Network” ).

Alden Global Capital, another private equity fund, owns MediaNewsGroup, which owns many major papers including The Denver Post and the San Jose Mercury News. Alden is now the largest shareholder in the Tribune Company, which  owns the New York Daily News, The Baltimore Sun, the Chicago Tribune, and a long list of other major market daily newspapers.

So now, McClatchy. The leading bidder is Chatham Asset Management, which owns the notorious American Media. Hmm… you remember it, right? It owns the National Enquirer, the supermarket tabloid drawn into one of the many Trump scandals including the so-called "cats and kill" scheme to purchase and then shelve Ttrump accuser stories, and of course the Bezos photographs that were stolen and published. All of Trump’s dirt put in a mystery "safe" that has yet to be opened. So, journalism or corrupt extortion -- depending on how you look at it.

So why would a financially driven private equity firm buy an ailing newspaper chain in an industry under siege?

A quick rewatching of Michael Douglas in “Wall Street” might be timely here. “Greed is good,” says Gordon Gekko ,with no hit of remorse. Back then, he bought an aging wire and cable company. But the payoff was to sell the real estate and shut down the factory, leaving all the workers without jobs.

Is private equity buying newspapers for the business, or is it just the buildings and the hard assets they plan to spin off as they wind down the businesses? We can’t know the strategy, but rebuilding and investing in the newspaper business doesn’t seem to be on the agenda.

Meanwhile, IBT Media, which bought Newsweek from Barry Diller's IAC/InterActive in 2013, finds itself guilty. It’s a mess of a story, and I won’t bother  you with the details, which you can read about here..

Here's how the once-storied media brand came unglued: Newsweek began in 1933 as a competitor to Time magazine. In 1961 The Washington Post Company purchased Newsweek. The Post solid it, for just $1, to Sidney Harman (of Harmon/Kardon Audio fame). He merged it with The Daily Beast (which is a Diller publication) and Diller sold it for some undisclosed sum, to IBT. So you can see the downward slide,

So some Gordon Gekko outfit will buy McClatchy or bail it out. It is in grave danger. As Howard Beale so wisely understood -- or "Network" writer Paddy Chayefsky speaking through Beale: ”The whole world's people are becoming mass-produced, programmed, numbered, insensate things. Because this is no longer a nation of independent individuals. It's a nation of some two-hundred-odd million transistorized, deodorized, whiter-than-white, steel-belted bodies, totally unnecessary as human beings and as replaceable as piston rods.”

If those words aren’t familiar to you, it’s time to watch the movie “Network,” perhaps the most chilling film ever made. Because in many ways, Beale would have turned into Donald Trump if he’d run for office.

newspapers, publishing
1 comment about "Is Gordon Gekko Buying The News Business?".
Check to receive email when comments are posted.
Next story loading