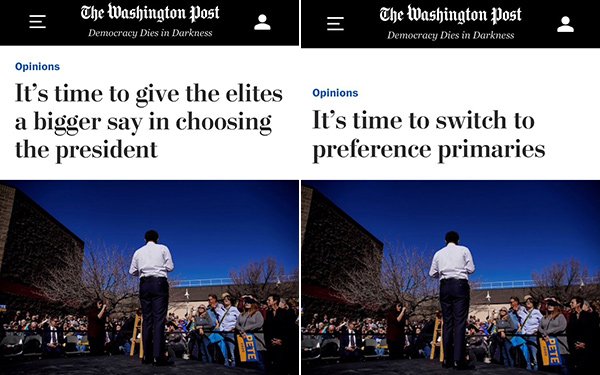 The Washington Post this week changed the headline on an opinion column that had read: "It's time to give the elites a bigger say in choosing the president."
The op-ed started trending on Twitter as people across the political spectrum slammed the newspaper, while pointing out the irony of its motto, "Democracy dies in darkness." Others accused the newspaper of being the political mouthpiece for owner Jeff Bezos, the billionaire founder of Amazon.

WaPo later changed the headline to read: "It's time to switch to preference primaries," borrowing some pedantic jargon from the text.

The column was written by Marquette University associate professor Julia Azari, who explored the idea of changing the electoral process to reduce the likelihood of unpredictable outcomes. In other words: prevent the possibility of political outsiders like Donald Trump and Bernie Sanders, who identifies as a Democratic Socialist, from ever getting elected president.
She cited Trump's election as "proof that nominations shouldn’t be too democratic," saying he lacked "conventional qualifications and appreciation for democratic norms" versus previous nominees such as former President Barack Obama and Mitt Romney.

The reaction to the original was over-heated for a column that was mostly an academic thought experiment. Azari acknowledged the practical difficulties of creating a new election system. The Electoral College also has been criticized for being an undemocratic relic that favors the political elites who don't trust the uninformed mob.

In the digital age, that mob has moved to Twitter.
Donald Trump Jr., the president's son who serves as a quasi-spokesperson for the Trump administration, was quick to point out WaPo's connection to Bezos.
President Trump has accused the WaPo of running negative stories after he criticized the ecommerce giant for not paying taxes, destroying the retailing industry and killing jobs.
Sanders also has blasted Amazon for being a monopolist that has prevented the unionization of its workforce. His supporters also accuse WaPoof again trying to protect the Democratic establishment they blame for undermining his 2016 campaign while favoring Hillary Clinton.
newspapers, politics, twitter
Next story loading